or shame on you Paris?  After getting pick pocketed where can I point the blame; you, them, or me?

I spent about a month planning our anniversary trip to Paris.  Hours went into picking the perfect hotel, what day to go to what museums, which tours were the best, and where to find that quaint Parisian bistro you see in all the movies.  I read two travel guides front to back, talked to locals and experienced travelers, and watched several videos all of which warned Husband and I of the pick pocketers that threaten the streets of Paris. It still happened.

We were careful, we knew to avoid people trying to distract us, and we walked with a purpose everywhere. Husband kept his wallet in his front pocket, I carried an over-the-shoulder bag, and we never had over 100 Euros on us.  Our mistake was one that still had precautionary thoughts.  Sitting outside at a cafe we chose a table right next to the wall to avoid sitting in the middle of the sidewalk.  I set my purse under the table, against the wall, in front of my feet and Husband did the same but with our camera.  Both bags were within my eyesight and guarded by our legs. Not good enough.

A man sat down at a table directly behind Husband.  The waiter never took his order waiting for the customer to finish his phone call.  A different guy selling flowers came walking down the sidewalk offering Husband and I roses.  We looked at the flowers and politely declined his offer. Husband and I continued eating.   Two minutes later I looked down at our feet and noticed our camera gone.   At some point the man behind Husband had left the restaurant.

This is a classic example of how pick pocketers work in teams, one to distract and the other to make the steal.  In the meantime, three cops were on a dark side street smoking cigarettes just around the corner as this was going on. Hmp.

After our ruined meal, Husband and I headed two blocks over to the neighborhood "police station." We walked in to find two policewomen (who only spoke French) sitting in a dimly lit, scuffed up, graffiti covered, disgustingly filthy, police station.  Through our broken French and their broken English we came to the realization that this police station does not have computers and we can not file a report at that location.  It is 2013, in the middle of Paris, and this police station DOES NOT HAVE COMPUTERS!

The policewomen gave us directions to the next "police station." Husband and I briskly walked through the dark streets trying to find the next station.  We questioned which road to turn right down so we stepped over to a store window to use the light to look at our map. (Again, we know not to pull maps out in public)  A man came over and stood right next to Husband.  I gently tugged on Husband's arm moving him a foot and a half away from the man.  The man scooted a foot and a half back towards Husband.  At this point Husband and I just took off down the next road getting away from this guy.  ARE YOU KIDDING ME?!

We luckily found the next police station.  The front door was locked but the police inside motioned us to go to the side of the building.  There in the dark Husband and I stood on the side of the police station talking through a window covered in burglar bars to a cop barely over the age of 16.  He told us that we could not file a police report at this station because it is closed. SERIOUSLY?! Who closes a police station in a high traffic area?!

At this point Husband and I were pretty rattled.  We didn't feel safe.  If something else were to happen who would be there to help us?  We obviously couldn't count on the police based on the last two stations we visited.  As Husband and I made our way to the Metro station, a man stopped us to ask if we wanted to buy flowers.  I looked up at him and recognized him from the restaurant.  Husband quickly grabbed my arm and we kept walking.  As we briskly got away from that guy, I looked back over my shoulder and saw the man doing the same thing, looking back at us.  I told Husband I wanted to go back and kick this guy, who helped steal my camera, but according to the U.S. Embassy's website payback against a pick pocketer is a pretty serious crime. Um, what?!

In a country that has an obvious world wide known problem of pick pocketing why is more not being done?  Sure, we should have been smarter and kept our bags in our lap, but shouldn't a city be attempting to stop the excessive amounts of pick pocketing?  When your museum workers go on strike in protest of the pick pocketers inside the Louvre, THERE IS A PROBLEM.  Millions of people flock to Paris to see the glorious sights the city has to offer, spending billions of Euros a year in tourism.  Don't those people deserve to be protected against crime? 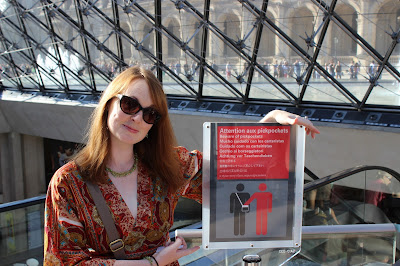 Posted Signs in the Louvre

Overall I did not feel safe in Paris.  It was not just the pick pocketing.  My first clue was when we stepped off the airplane inside the airport and I saw signs warning us of scam artist cab drivers.  Then on the way to baggage claim, we passed by three military men carrying military rifles.  Uh............ I don't think we are in Kansas anymore.

On our fourth day in Paris, Husband and I saw a store owner chasing gypsy women down the street screaming at them.  These women go around and ask tourists to sign "petitions".  While you sign the petition, one stands at the side and picks your pocket.  You can read about it here. A few hours later they stopped us in front of a church.  We kept walking.

During our fifth day in Paris, Husband and I were followed through the Metro station by a solo man.  He wasn't going to pick pocket us, he was going to rob us if given the chance.  He watched us walk his way, then turned and took off after us.  We picked up our pace after quickly exchanging concerns and we got "lost" in a big group of Asians and a street band.

In the end I don't blame myself, Husband, or Paris for getting pick pocketed.  I blame the criminal.  They made a choice to steal and we became victims. The next morning we were able to go out and buy a new camera WITH insurance.  Husband and I now joke that my wedding present from Husband is also the same gift as my first anniversary present.  I told him next year, for our second anniversary, I would like to stick to just good old fashion jewelry, no cameras. 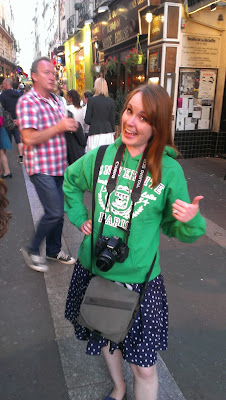 We didn't let this experience ruin our trip.  Husband and I had an otherwise great time seeing things we had only read about in the history books.  Someday we do hope to go back and visit Paris again.  Maybe then I can buy something Chanel instead of something Canon.