It's not even 5 p.m. yet and all of the following have been made for the week:
-Crock Pot Chili (Dinner Sunday and Monday)
-Beer Bread Loaf (Dinner Sunday and Monday)
-Chicken Noodle Soup (Will freeze until dinner Tuesday and Wednesday)
-Applesauce (Made from Farmer's Market apples about to go bad)
All made from scratch and the best part... no cooking after work for 3 nights!
One Sunday in the future I will attempt a full week's worth of meals but I think 4 is a great start.
......chomp, chomp....

In other exciting sports related news...yesterday Husband and I had the opportunity to attend our very first (possibly only) FC Bayern game!

Back in December we toured Allianz Arena when my football fanatic Danish cousins came down to visit us.  We had a wonderful time seeing the grass "tanning" under giant lamps, the locker rooms (unoccupied...), underneath the player's trap, and the post game conference room. 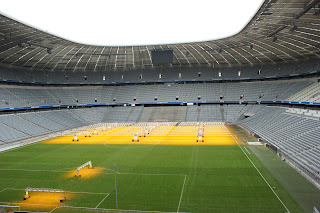 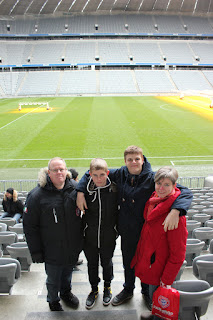 ﻿
I was shocked when the tour guide told us (remember this is in December) that the games were sold out for the entire season up until the last game in June.  I was so bummed to learn that our chances of attending a FC Bayern game were pretty slim.  The tour guide then went on to crush further plans stating that the majority of the 80,000 seats are sold to season ticket holders or corporations.  The FC Bayern tickets are in such high demand that they are not even available to be purchased by the general public. It is not as easy as if you wanted to attend a baseball or basketball game back in the States.


This tells me that football is HUGE around these parts of the world... 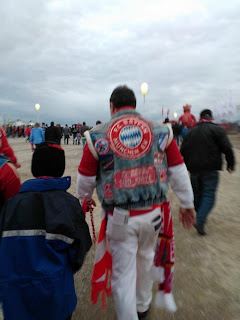 This guy is proof there is a football craze around here!
So when Husband was offered to buy a pair of tickets from a fellow coworker, we threw our "Entertainment Budget" for the month of March into the trash and grabbed our chance at witnessing a FC Bayern game in action.  Maybe next month we will finally buy that couch we've been eyeing?!
﻿ 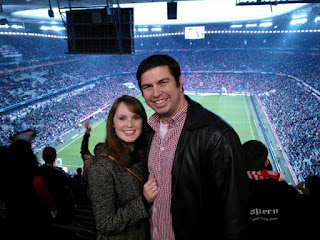 Our first European soccer football game!
FC Bayern played against FC Dusseldorf and won 3-2!  Each time a goal was scored the announcer would start a sentence over the intercom and the fans would shout the ending word.
Here's an example:
Announcer: Thomas
Fans: MULLER!
Announcer: FC
Fans: BAYERN!
Announcer: 3 to
Fans: 2! (the score)
Announcer: Danke ("Thank you")
Fans: BITTE! ("Bit-ta")
It was hilarious to hear the fans basically involved in a conversation with the game announcer.  My favorite part was when the entire stadium shouted "Bitte" meaning "You're welcome".  I think "Bitte" has become one of my favorite German words.  Husband and I use it all the time mixed in with our English conversations. It's just a fun word to say! 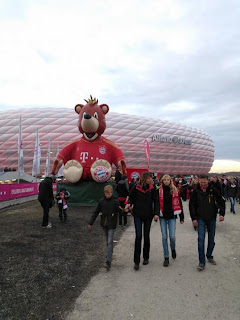 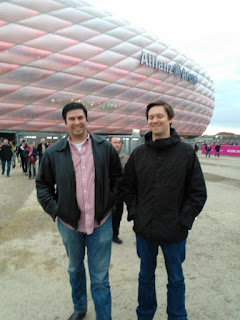 Thanks to our friend for introducing us to the FC Bayern song:
Let the good times roll,
﻿