I am a day late...but that is because we were too busy yesterday celebrating;  SO...Happy St. Patrick's Day to ya!

Husband and I celebrated my tiny bit of Irish heritage German style, at the local parade here in Munich.  I didn't really know what to expect because the St. Patrick's Day Parade back in Dallas is a HUGE event every year. (But very spread out over a few miles, Texas sized of course.) 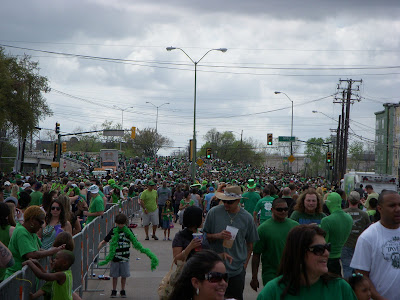 Dallas, TX 2012
Here are observations from our German St. Patrick's Day:
-Only a few people on the subway were decked in Irish flare.
-Hardly anyone brought their own cooler of alcohol.
-Most people had on heavy coats hiding their green apparel.
-There were not 18-wheeler parade floats.
-The bagpipes were awesome.
-Scotland, Australia, and the Norway were also represented in the St. Patrick's Day Parade. Huh?
-I saw Braveheart.
-However, I did not see a leprechaun.
-It took 30 minutes to buy one Guinness beer.
-At the after party, the space was so tightly packed of people, that I fled like a Dixie Chick seeking Wide Open Spaces...ditching my friends. Boo.
-None of the girls wore matching shirts with their friends.
-Next year we will go to the parade, skip the after party, and head straight to the Irish Pub for proper Guinness fish n' chips.
*Do to the insane amount of people crammed into Odeonsplatz, despite having my camera, in the event of feeling claustrophobic, I did not take it out for any pictures.  I was not having that crowd.  Feel free to enjoy a little bit of last year's St. Patrick's Day.
﻿ 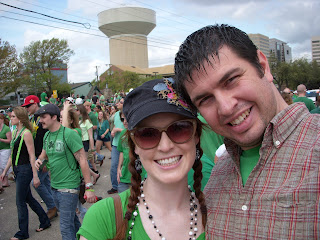