This weekend Husband and I took advantage of the gorgeous, springlike high temperatures and sunshine for another day trip out of Munich. We headed to Augsburg, Germany for a Saturday outing.

Every time we go out of town on a weekend road trip we drive by the town of Augsburg. Passing by I always say "I wonder what is in Augsburg?" Three of Husband's colleagues live in Augsburg and so he was curious as well.

Mid-morning Saturday, we hit the "Super A+" autobahn. Even though this nerve racking stretch of the autobahn does not have a speed limit, Husband prefers to maintain a speed somewhere in the middle of a grandpa and race car driver. Just a 45 minute drive outside of Munich we found ourselves rolling into Augsburg.

In Augsburg's city center we visited the Fuggerei and the Rathaus (town hall).

The Fuggerei is considered the world's oldest social housing complex still in use. That's right folks, we visited the projects. Actually, even though the Fuggerei was established in 1516 for families going through hard times, now days it is mostly considered an elderly assisted living community. The average age of the 100 or so residents is 71 years old. 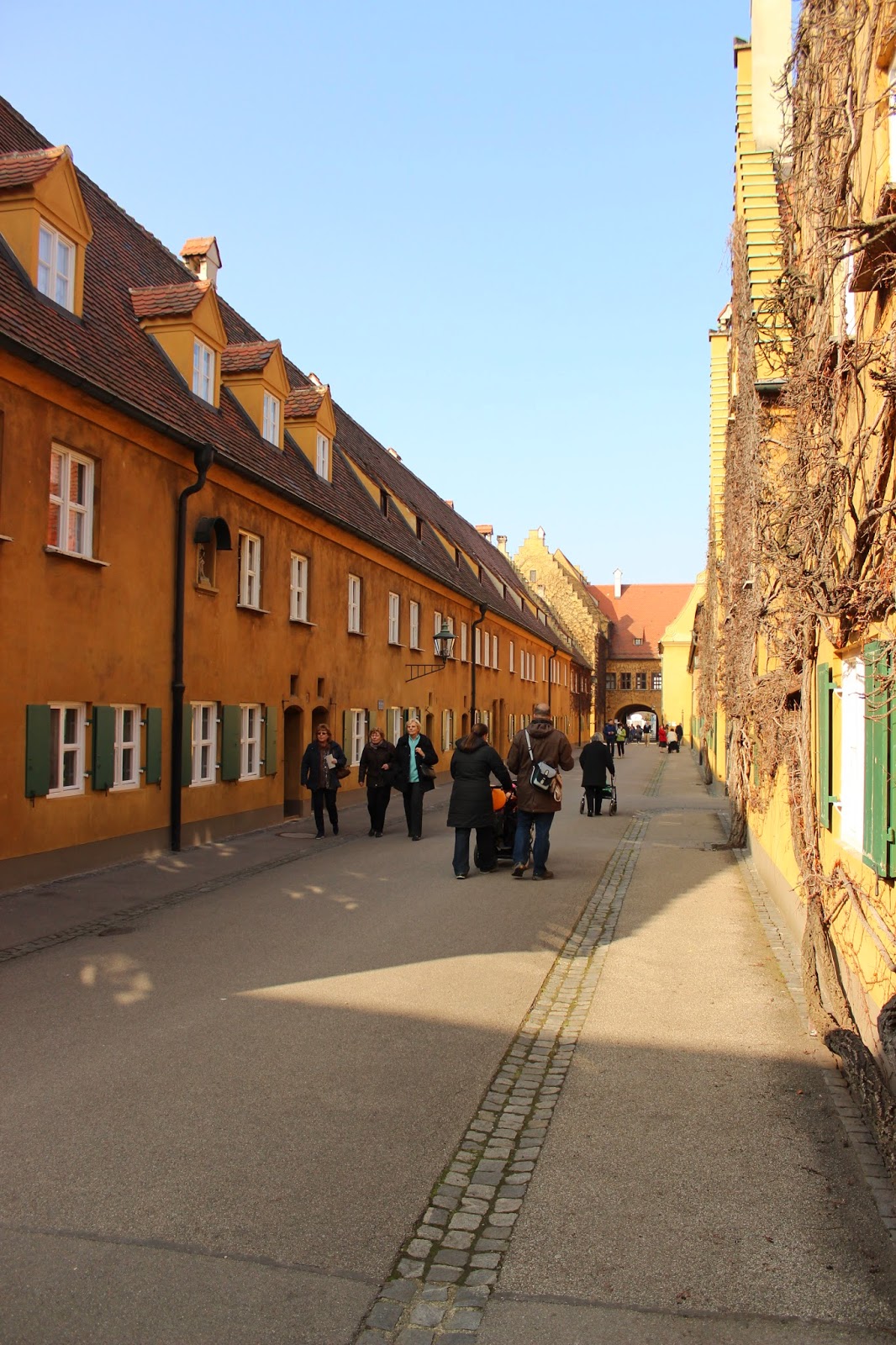 The main road inside the Fuggerei

Each resident pays only 88 cents a year in rent, must be catholic, and reside in Augsburg. The community is a large city block of row houses. Each row house is more like an apartment with two rooms, a kitchen, and a bathroom. 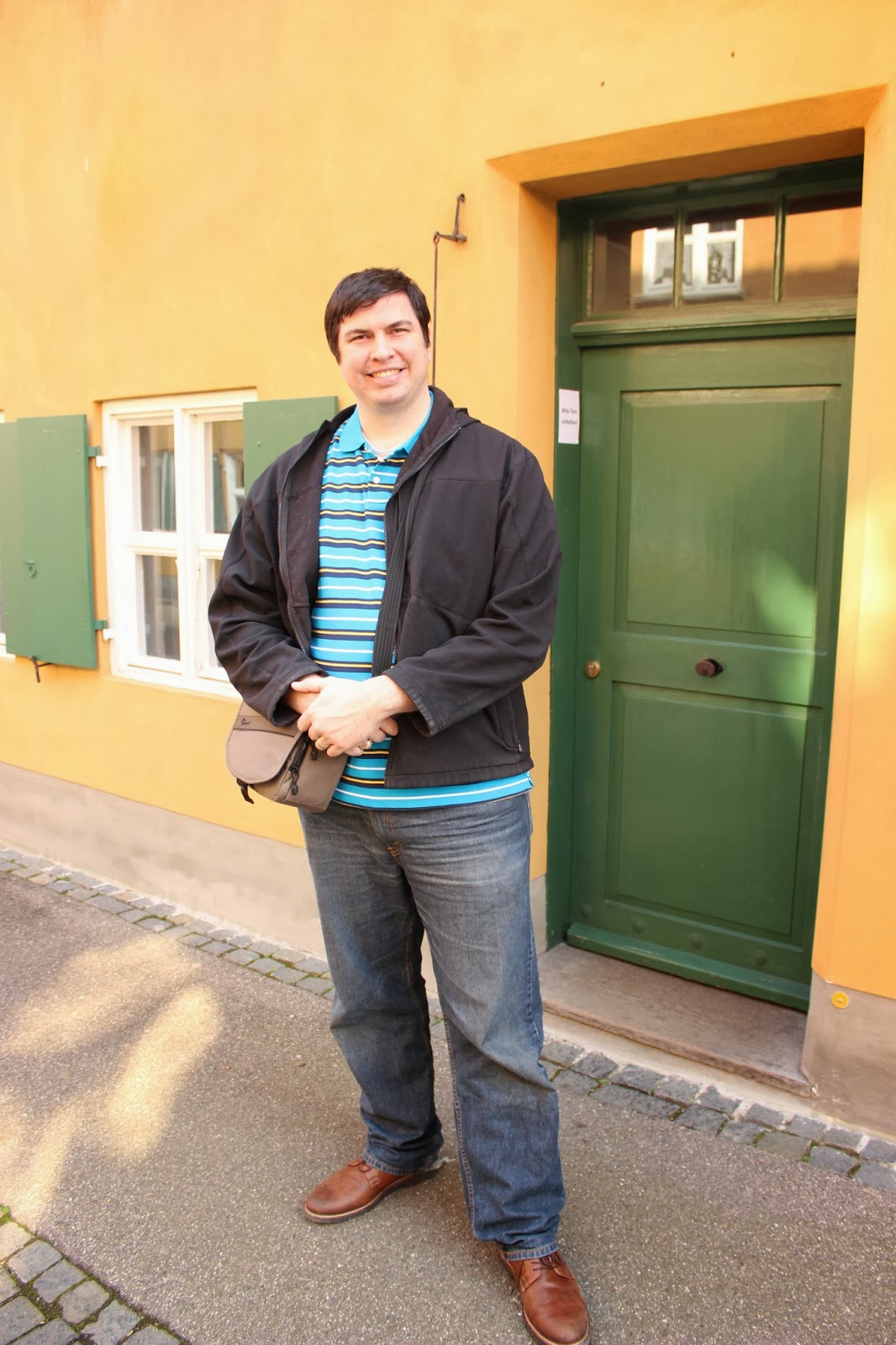 Visitors to the Fuggerei pay just 2 Euros to walk around the property. Inside the walls surrounding the Fuggerei is a museum, a beer garden, a chapel, a modern walk through apartment, a 16th century model of an apartment, and a World War II underground bunker. All of this is open to visitors. 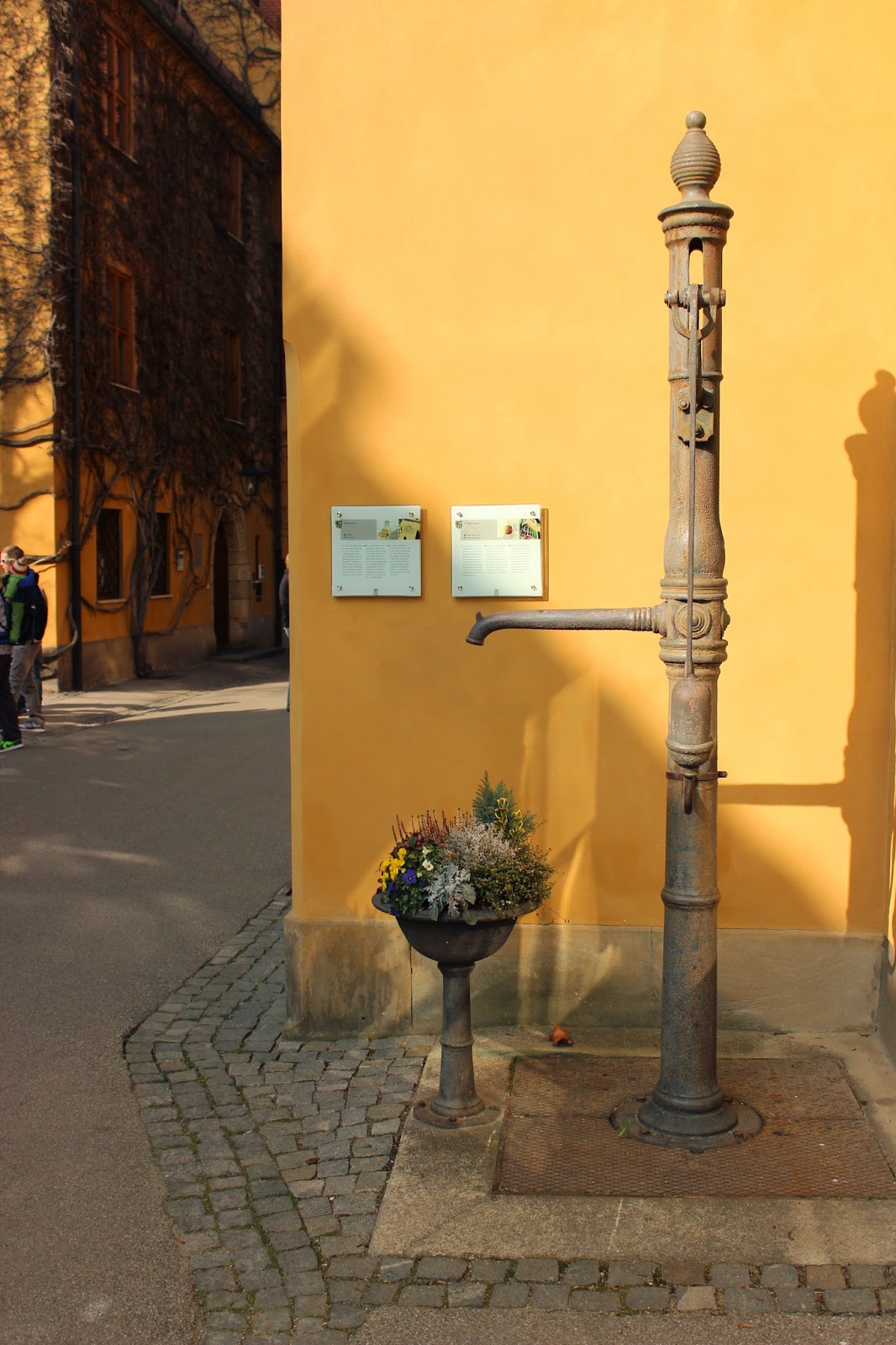 Unfortunately, I did not take any photos of the underground bunker. I was a bit weary to go down the old concrete steps into the dark, cold, bomb shelter... but I did. Inside the underground bunker was a museum exhibit dedicated to the dark days the Fuggerei encountered during World War II. Over the course of the war, Augsburg a heavily industrial town, was involved in a handful of air raids. The worst damage was done in 1944 close to the end of the war. Despite the 16th century Fuggerei being heavily bombed, all but one resident found safety in the bunker. Three days later, approval was made for the Fuggerei to be rebuilt over the course of the next decade.  It was eyeopening to think about the times the underground concrete walls had seen. 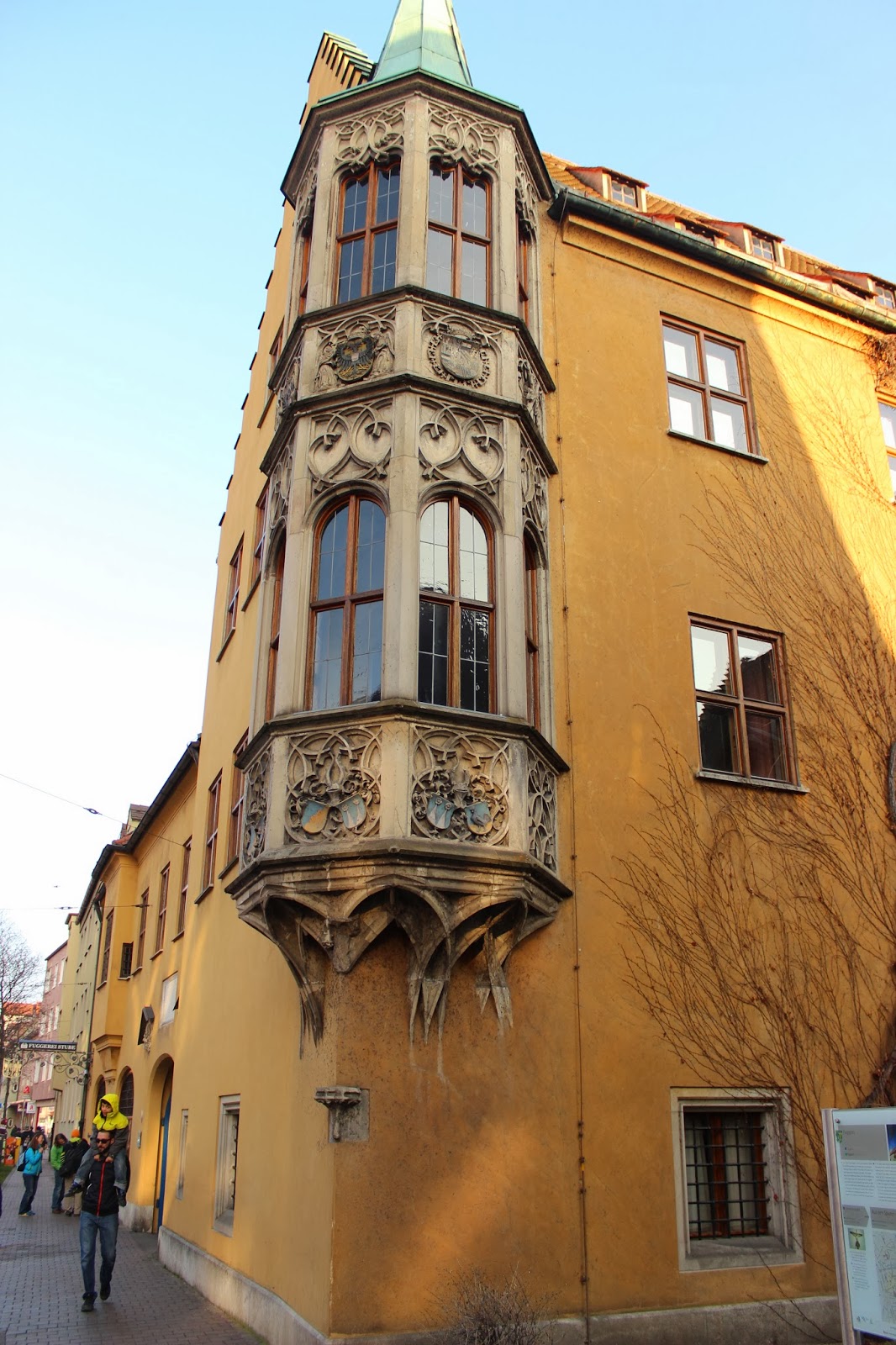 Leaving the dark times underground and resurfacing to the most beautiful Saturday possible, Husband and I headed to a local bakery established in 1923. There we enjoyed an afternoon coffee and cake. Do you know how difficult it is to pick a cake slice among 20 different cakes? 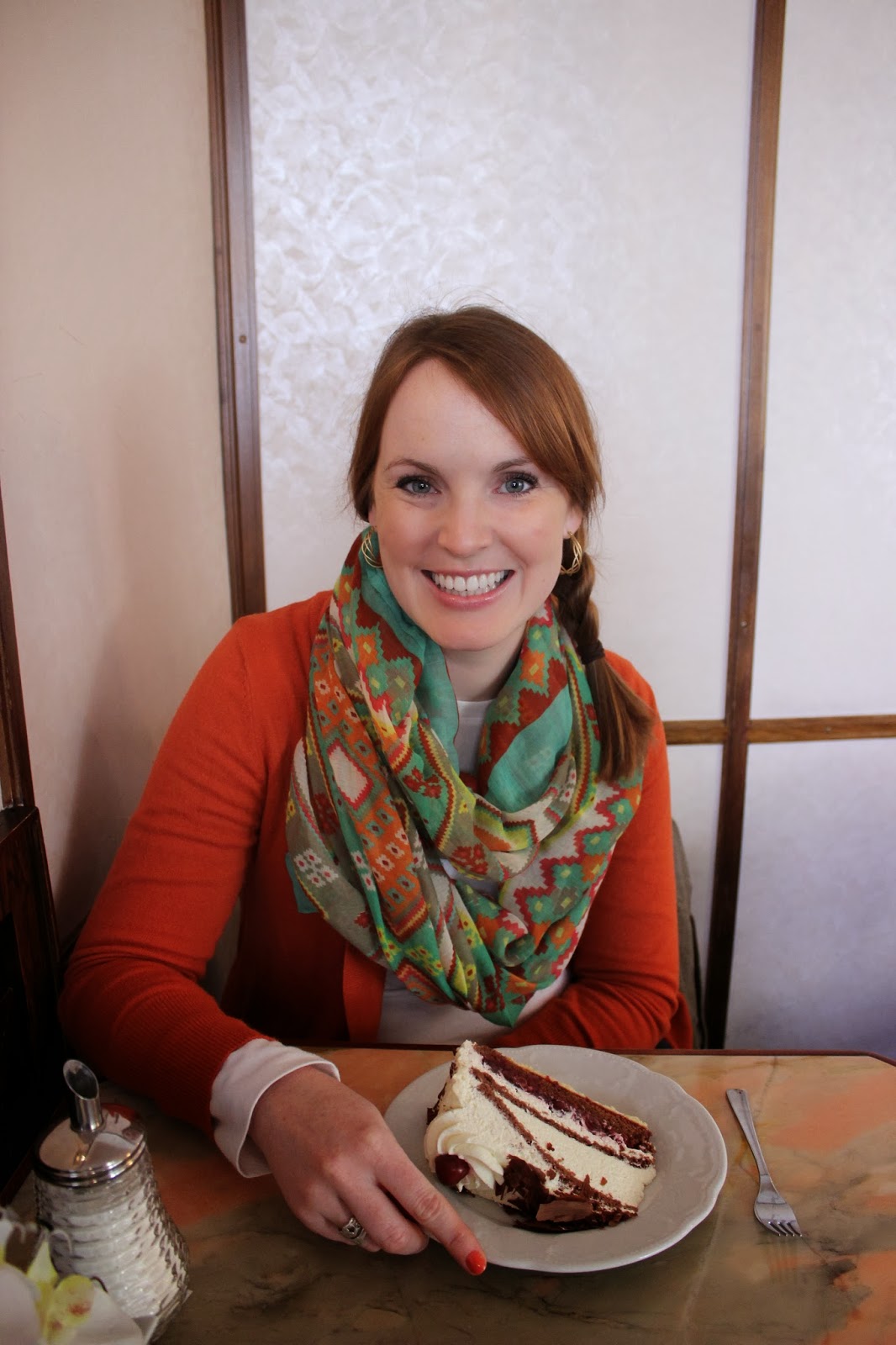 After a coffee and cake break, Husband and I headed to the Number 1 attraction in Augsburg, the Rathaus. A rathaus is the same thing as a city or town hall. Construction on the Augsburg Rathaus began in 1615 and finally completed in 1624. On the ground floor of the Rathaus is an exhibit showcasing the history and influences on the town of Augsburg. 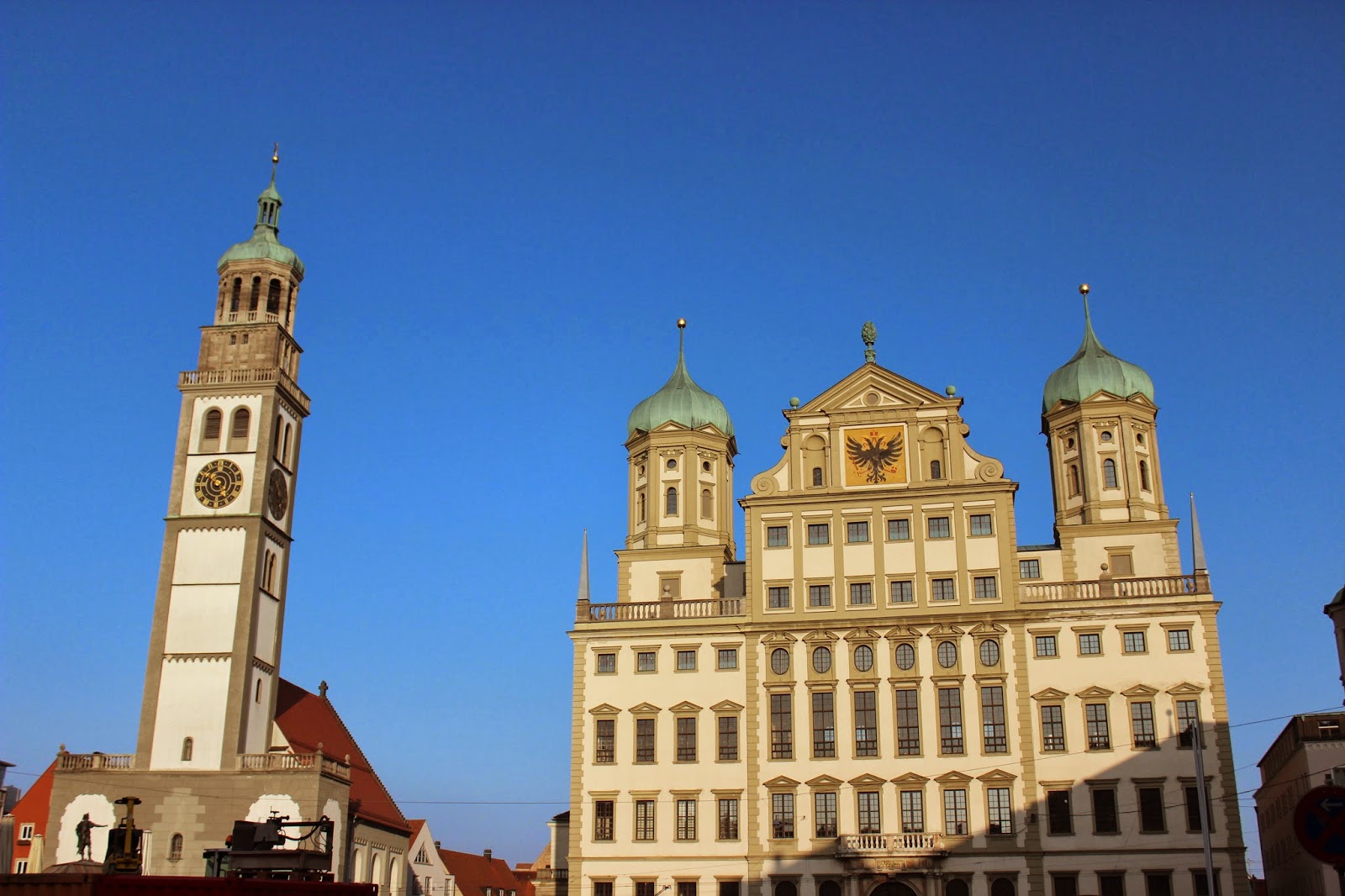 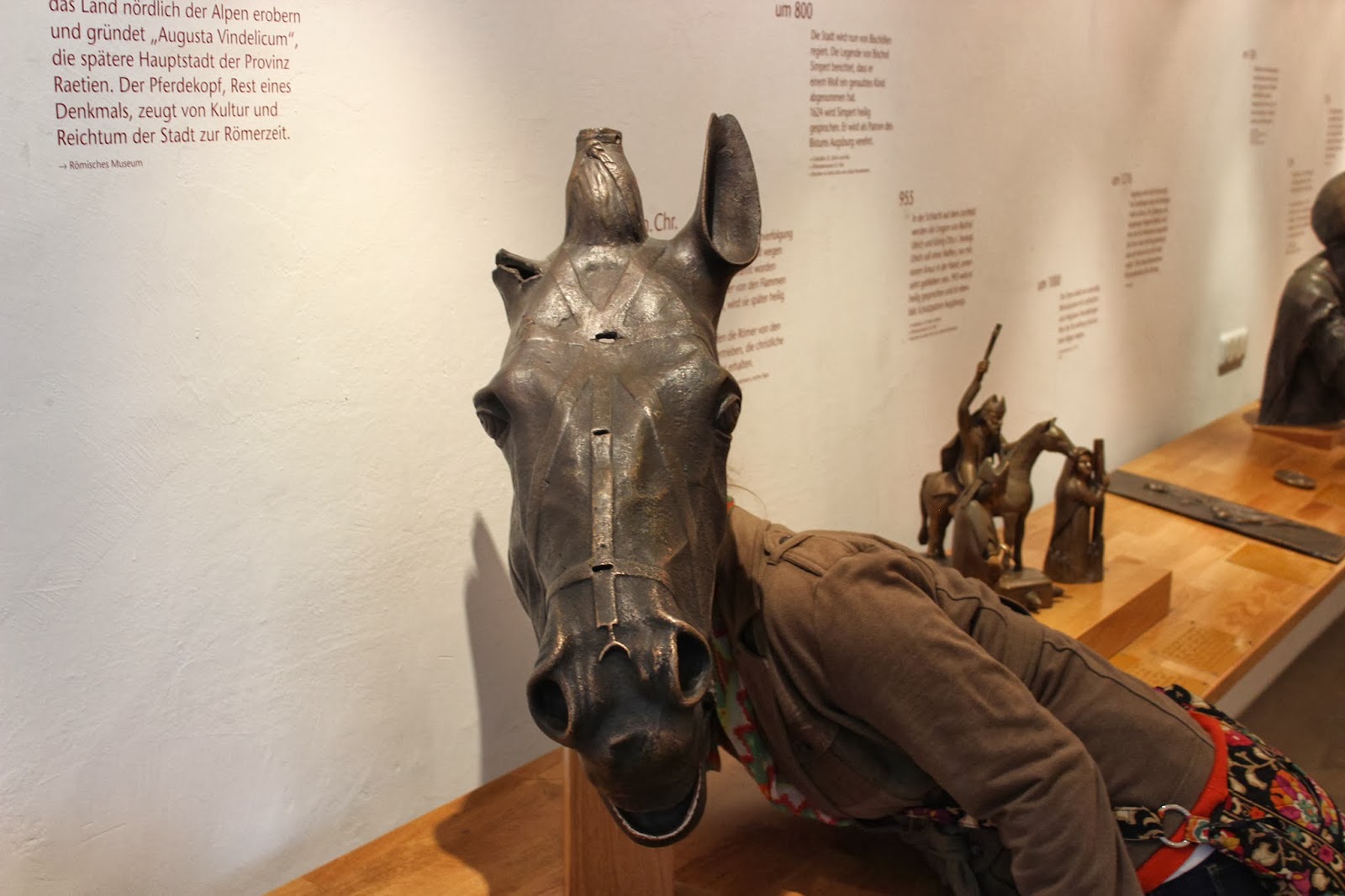 During the Roman Era

Up three flights of stairs, on the first level, is the Golden Hall. Before we even reached the top of the stairs my jaw dropped at the sneak peek coming through the doorway. Gold, gold, gold everywhere you looked! Detailed and elaborate paintings covered the ceiling and the walls. Paintings of Roman emperors lined the length of the back wall and Christian emperors the length of the front wall. I walked the entire room with my head back and eyes up at the ceiling. (probably with my jaw still hanging open) 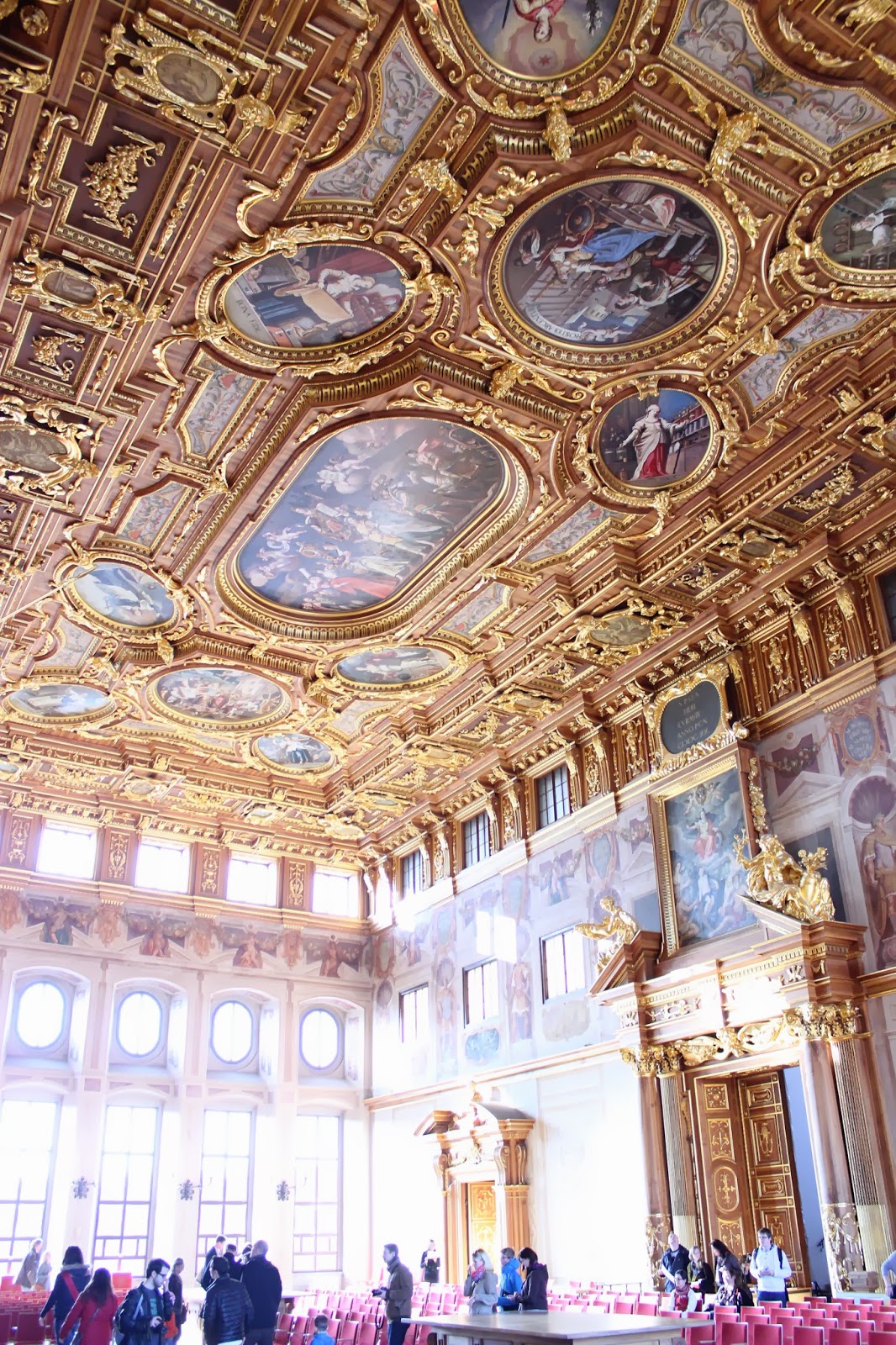 The City of Augsburg still conducts meetings inside the Golden Hall. Can you imagine making modern day decisions and votes underneath and surrounded by these paintings? The Golden Hall is considered one of the most important cultural monuments of the late German Renaissance. 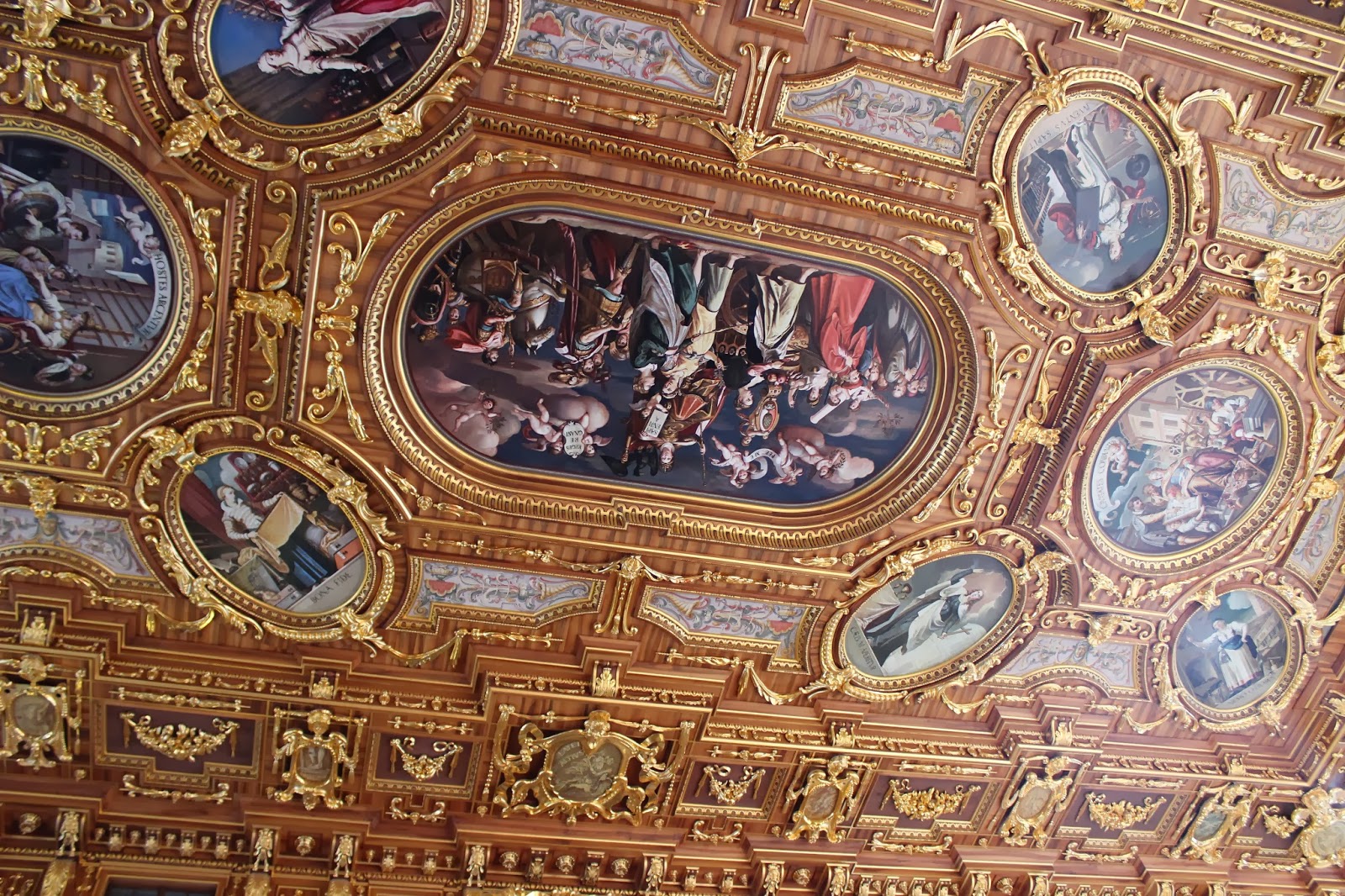 If you are coming to Germany for the first time, Augsburg would not be a place I would say you HAVE TO SEE! If you are coming to Germany for a third or forth visit, then I think Augsburg would be an interesting place to spend a day. There are several castles nearby that open to the public come midSpring. Husband and I are excited to visit one of the Fugger's castles sometime next month after the nonexisting snow clears from the passes.

May Your Days be Sunny,