Do you know what Walt Disney and Hugh Hefner have in common? 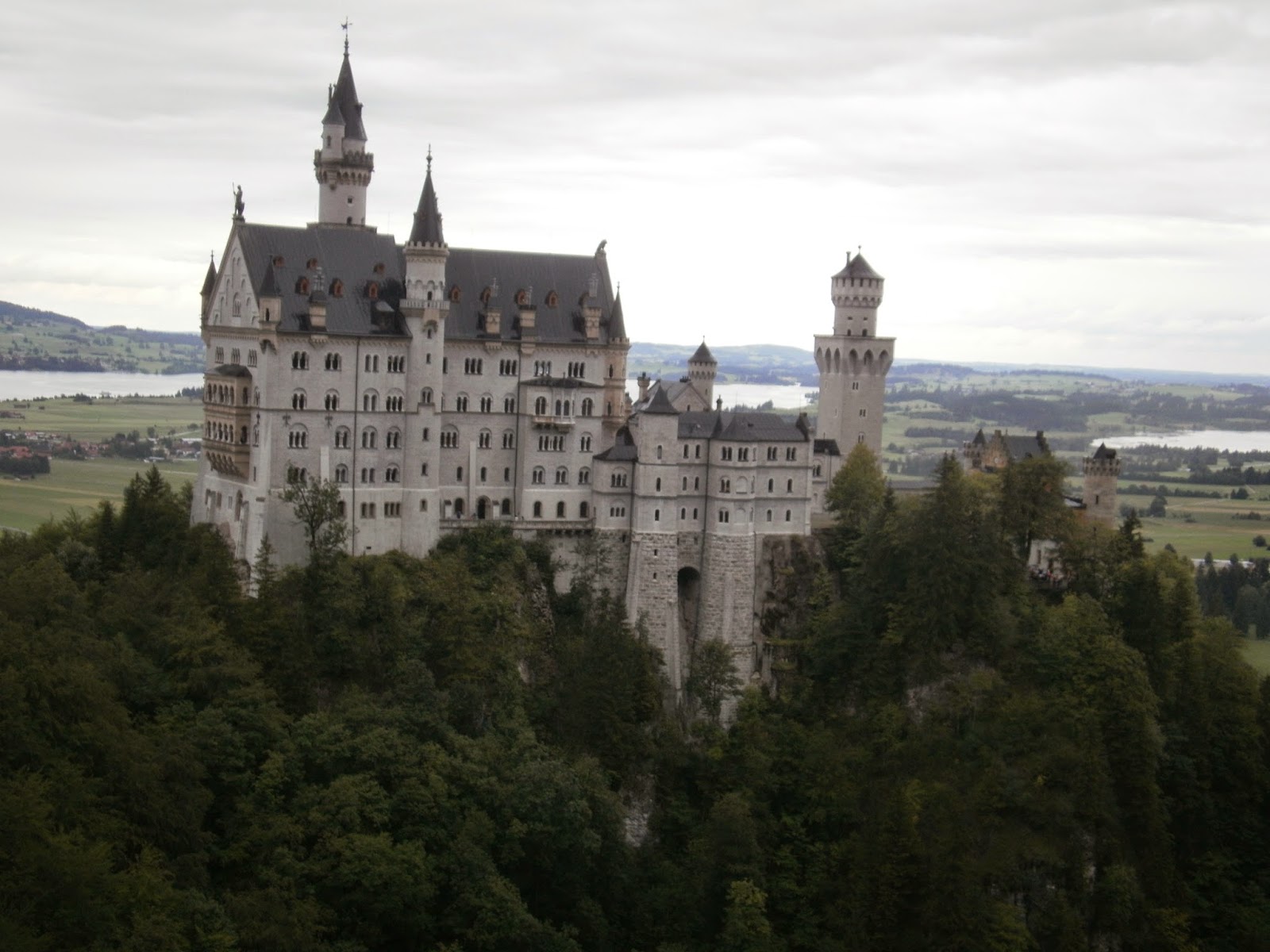 How about the 1864 Crowned King of Bavaria, King Ludwig II? A bit of an odd fellow but loved by the people, Ludwig was known as the "Fairy Tale" King. Ludwig designed the world famous, Neuschwanstein Castle which gave Walt Disney inspiration for Cinderella's Castle. During a time when most Americans (maybe Germans too) were overjoyed at the idea of owning a cast iron stove, Ludwig was sitting pretty alone inside his French inspired palace, Linderhof. He lived here while the building of Neuschwanstein was taking place.

A location on our "Must See" List, Husband and I ventured 1.5 hours outside of Munich to visit Linderhof Palace earlier this month. 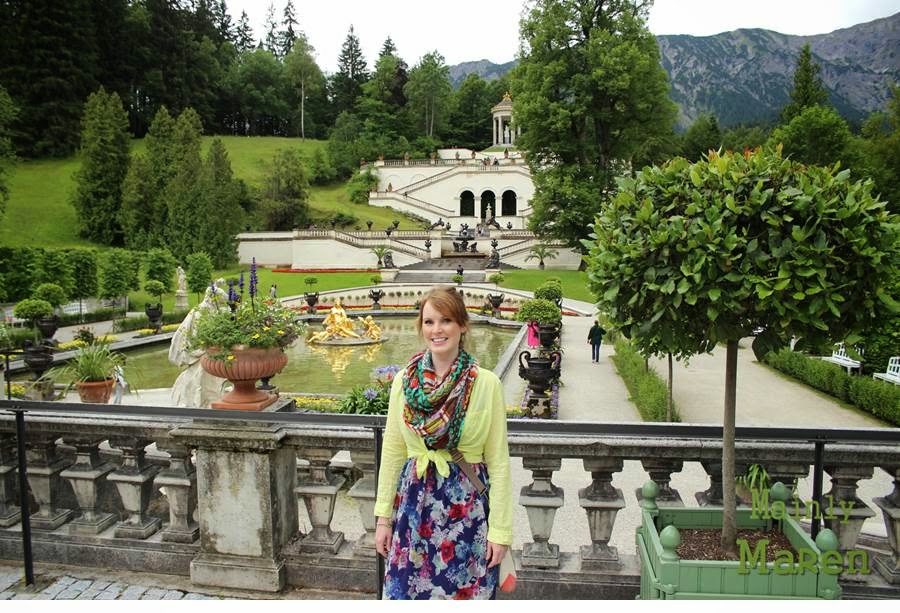 Parking, an English tour inside the palace, and entrance into multiple sites on the estate cost us exactly 20 Euros. Not bad for a Saturday outing! 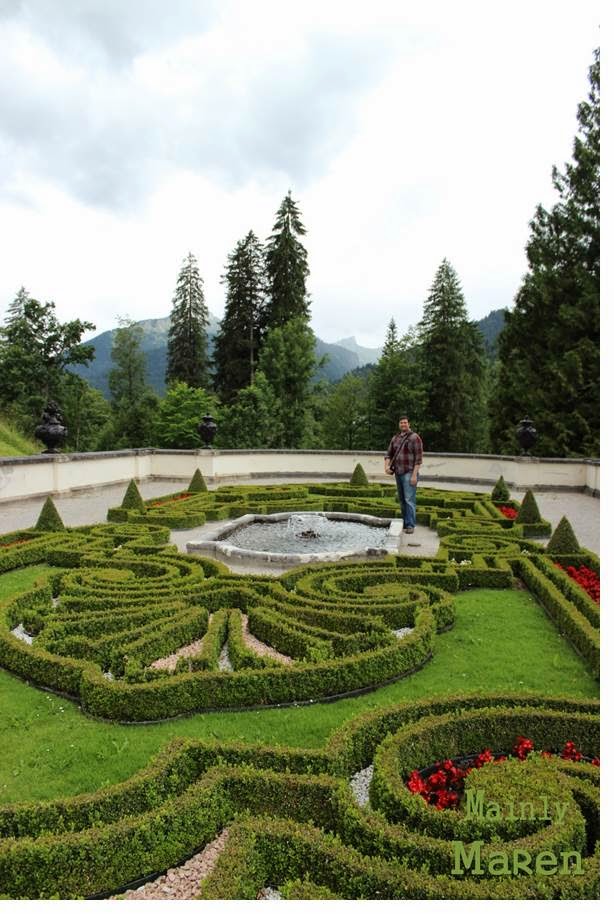 If touring the insides of palaces is not your thing, then just a walk around the gardens is well worth the drive. You only have to pay 3 Euros for parking! 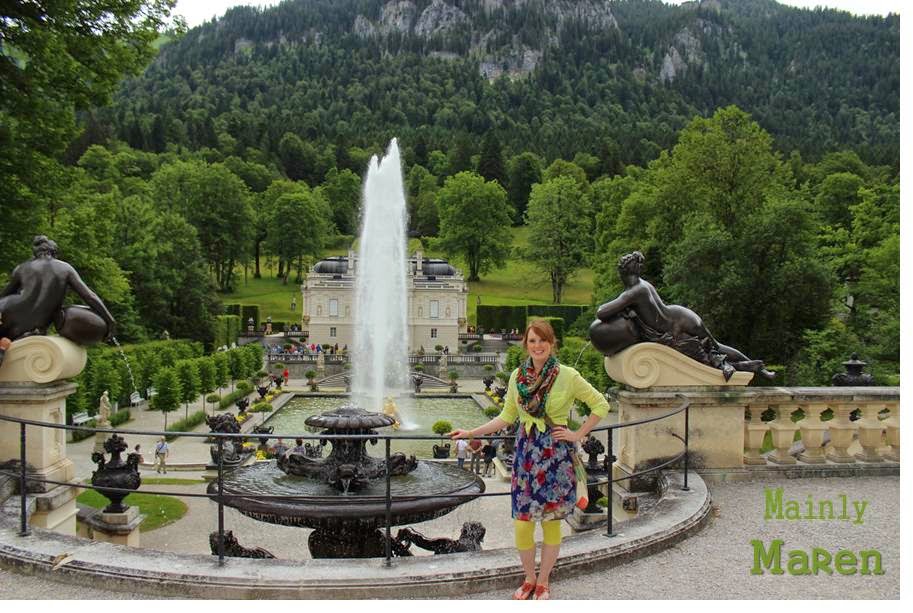 Ludwig definitely was not a fan of the simpler things in life. Architectural styles and designs were one of his artist hobbies. You can see how much thought he put into Linderhof. Details are everywhere! 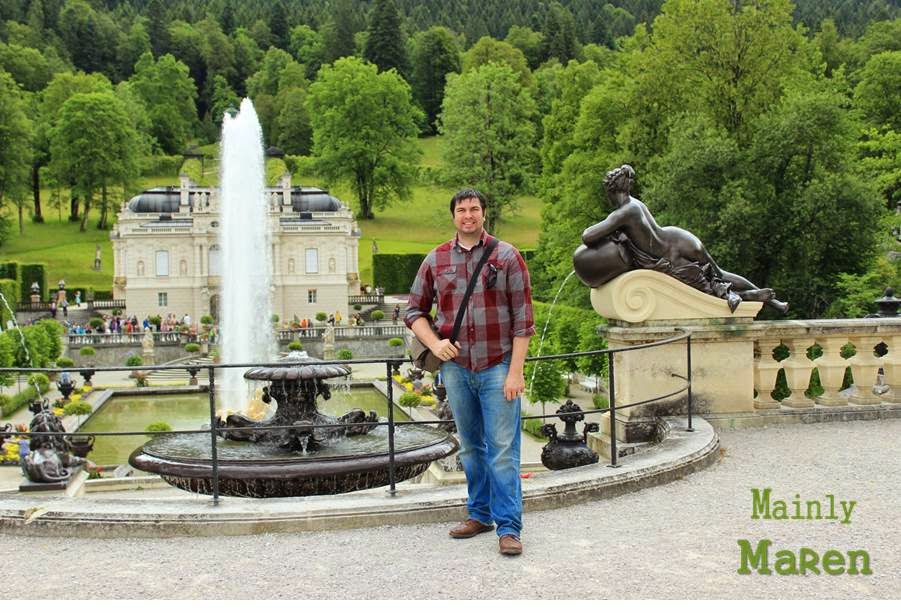 This fountain suddenly turn on while we were standing near the top of the garden. 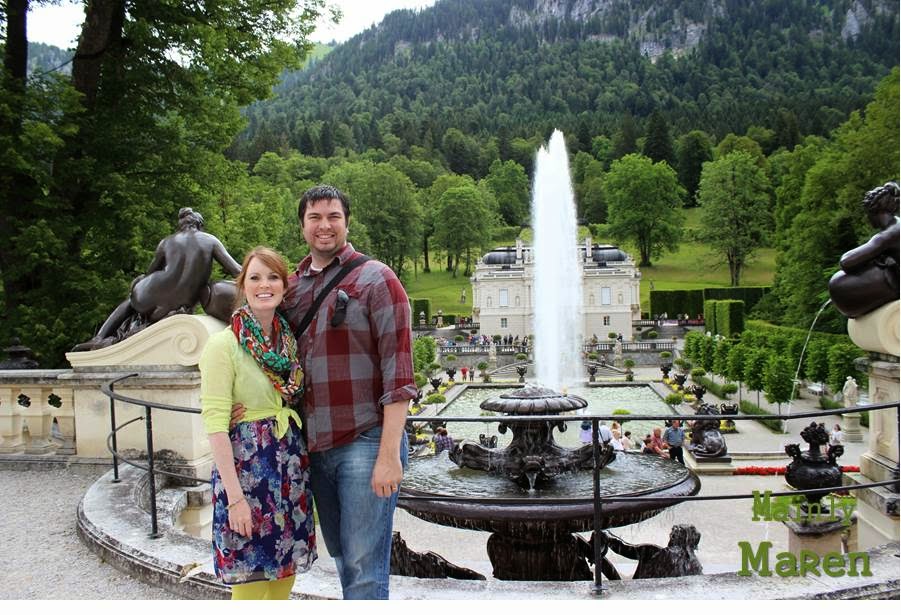 The massive water spray is actually from the rectangular pool down on the ground floor. We are almost to the top of the Southside garden at Linderhof. 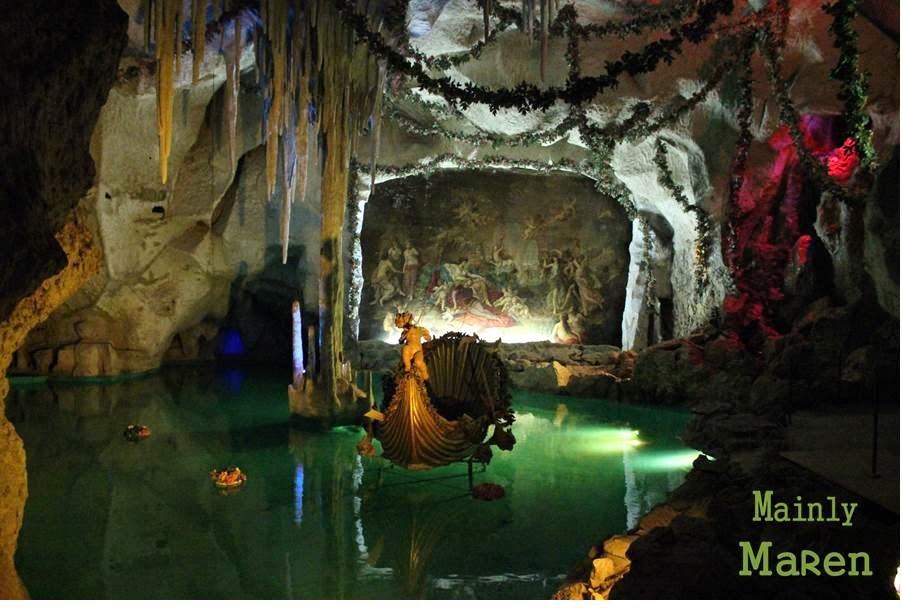 Still wondering about my Hugh Hefner comment from earlier? On the property at Linderhof, Ludwig had a man made grotto built. (Wonder if this is where Hefner got his inspiration?) Ludwig would sit inside this shell shaped boat and have one of his male staff members row him around. 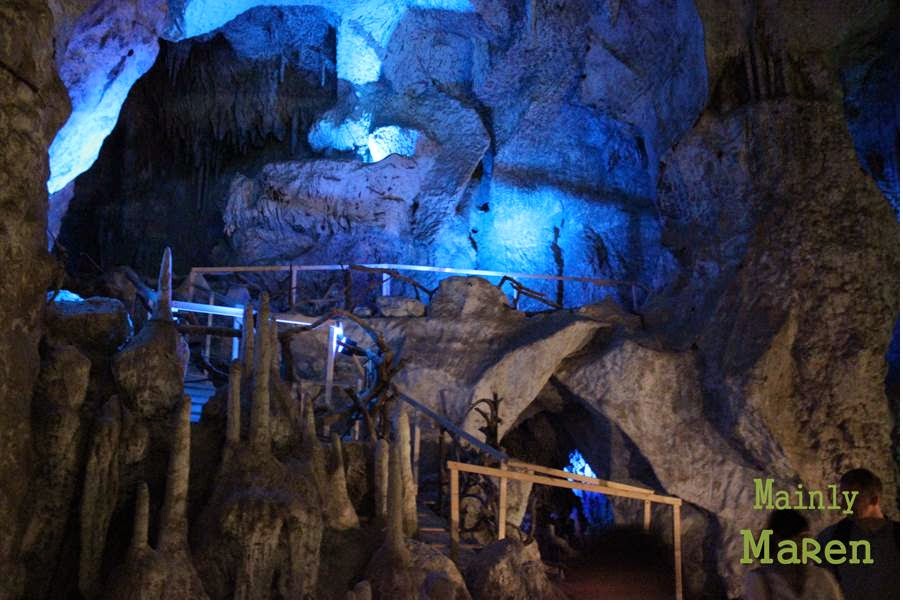 The grotto was built as a place where Ludwig could enjoy opera music. In fact the music would blare loudly and he could change the lighting based on which mood the music piece felt. I immediately thought this seemed so similar to Phantom of the Opera! 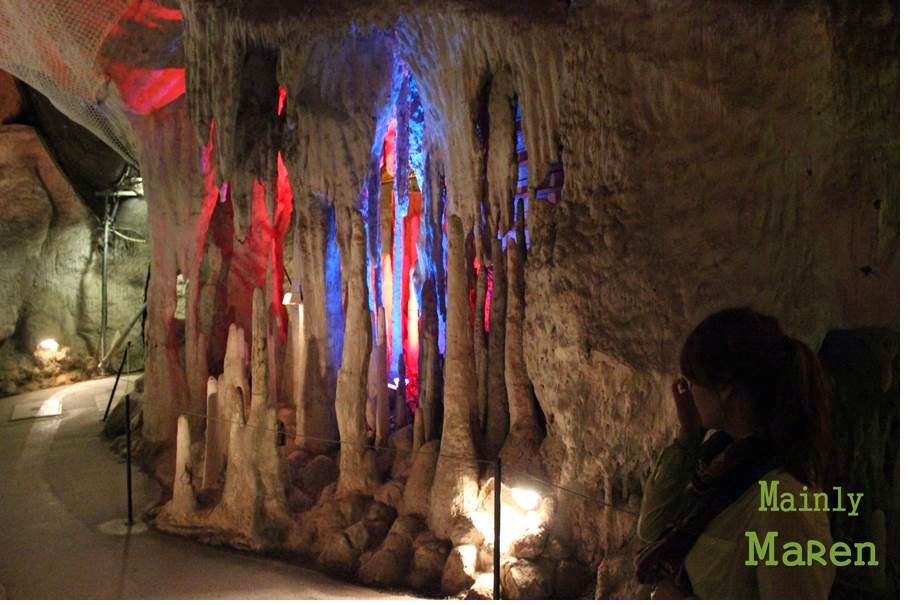 Can you believe this is all man made inside one of the mountain sides from the late 1800s? (Electricity?!) Weren't the American gold diggers (literally) heading to California at this point in history? I'm not sure if Ludwig ever had a girl up in this place, but the grotto had a super romantic feeling that made my fictional mind run wild. (I once was caught vacuuming in a tiara...) 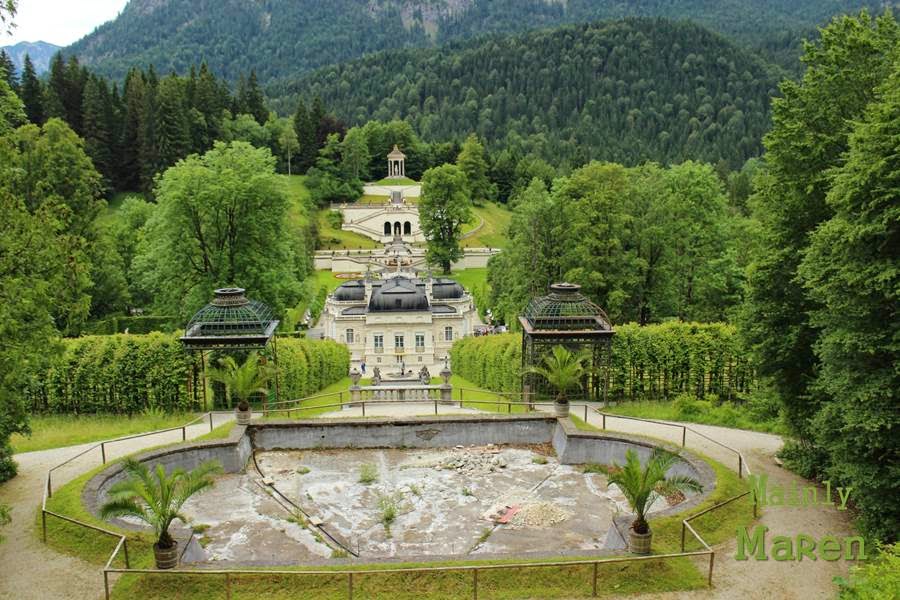 On the north side of Linderhof, there is a waterfall below this empty fountain. Ludwig's bedroom windows are the three way down below. This definitely was not a bad view to see each morning! 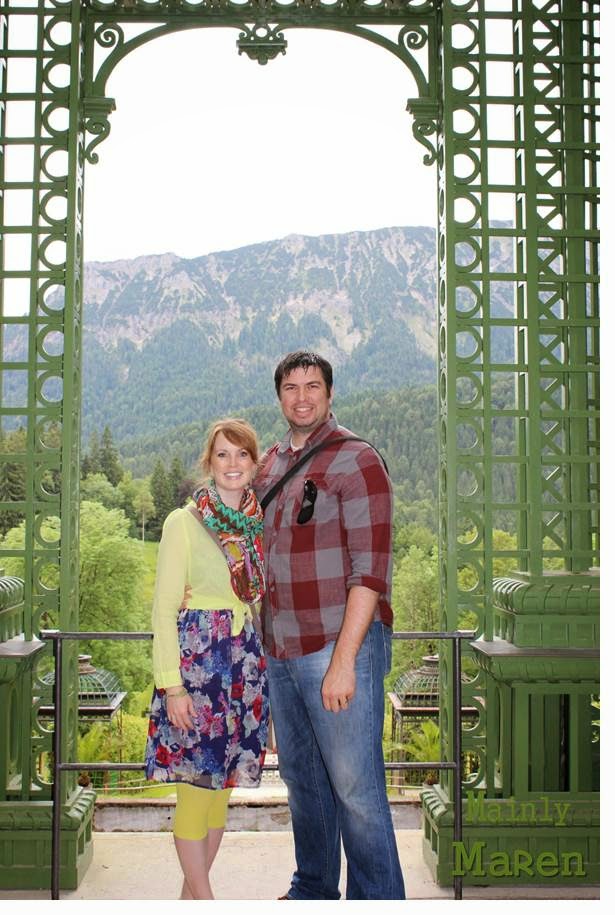 There are walking paths all through out the Linderhof estate. This gazebo provided another view of the entire property down below. Don't you love the mountains out in the distance? 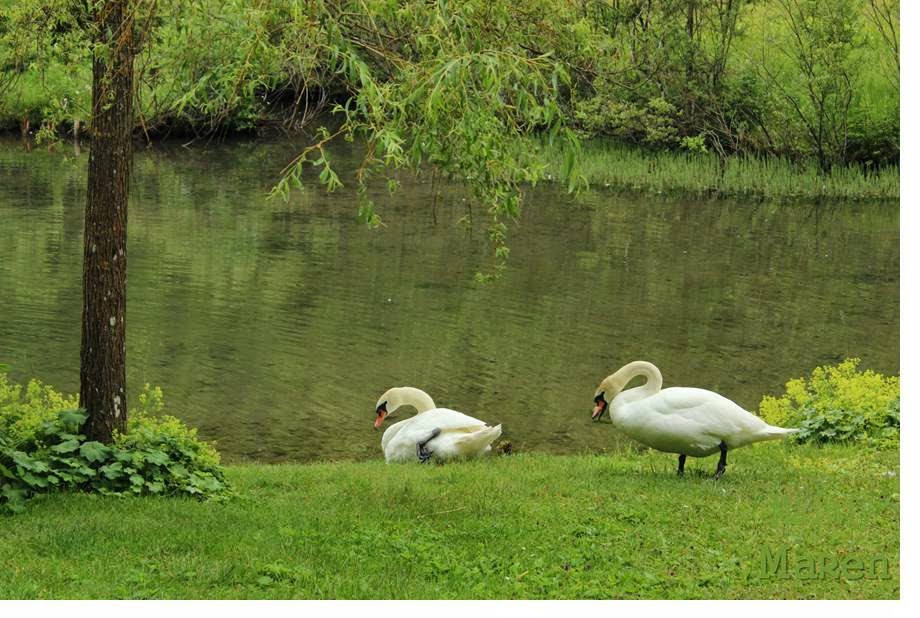 Of course a royal visit to a Bavarian castle would not be complete without a few greetings from the swans.

I can not believe it took Husband and I two years to get ourselves to Linderhof. The intimate feeling and secluded estate has made this palace my absolute favorite. Another plus? Most tourists head straight to Neuschwanstein and only a few find their way to Linderhof. It is just outside of Garmish-Partenkirchen and a quick drive from Munich! 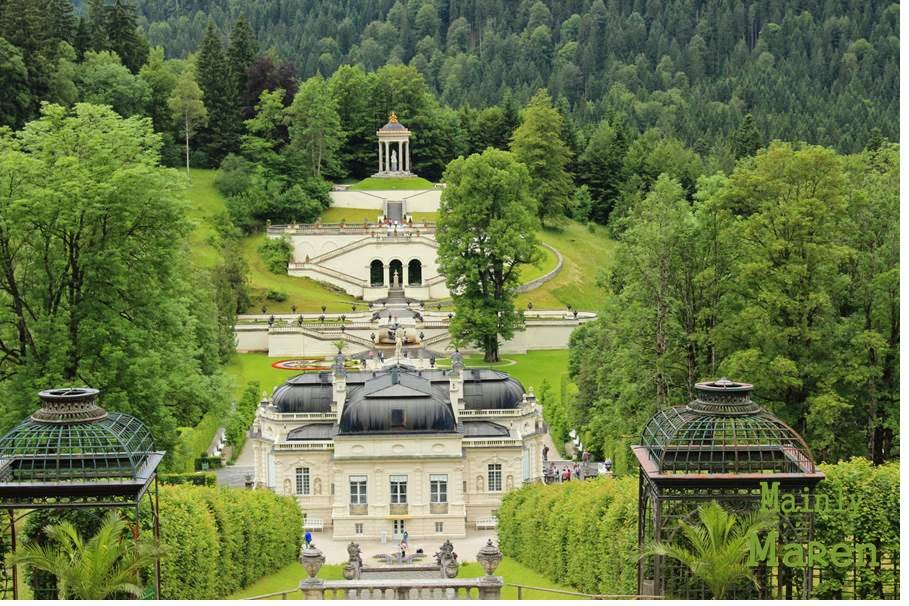 I Could Live Here,