All good things must come to an end. The world's largest Oktoberfest celebration in Munich has come to a close for 2014. 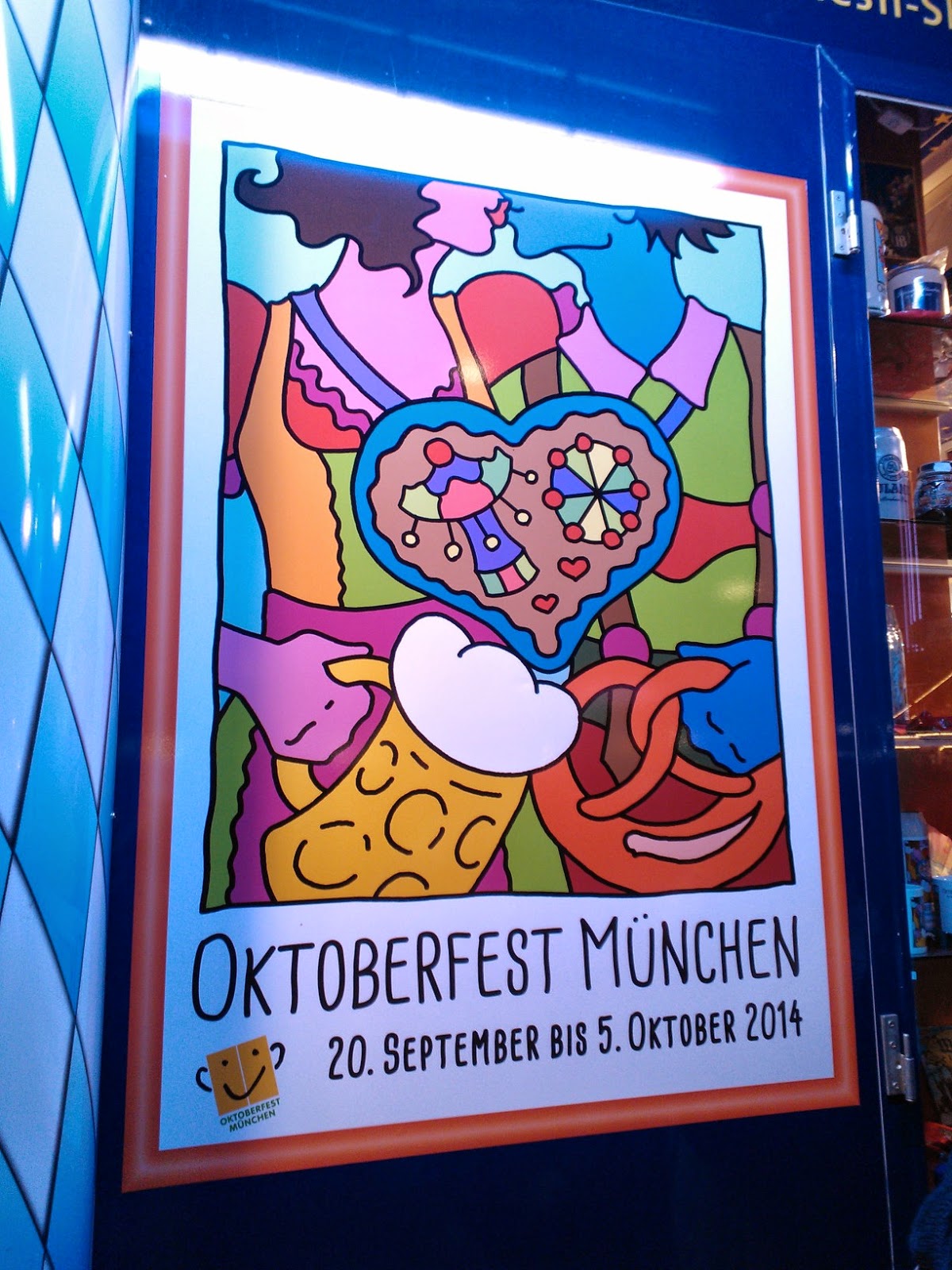 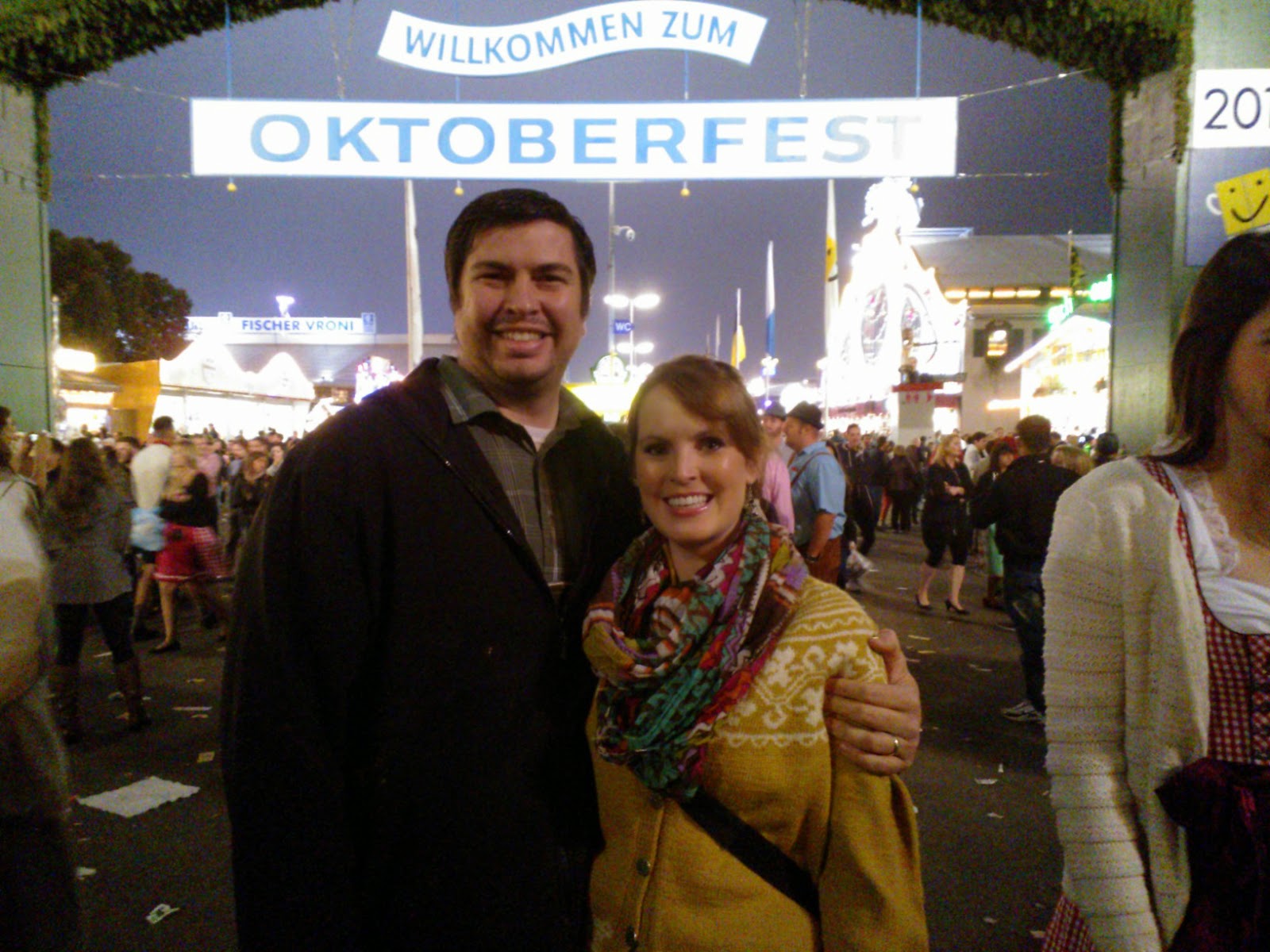 For two and a half weeks the streets of Munich have been flooded with people from all corners of the world. I've heard an American embarrassingly say "Hey Bro..." on the train, at the store I pointed a Brit in the direction of tissues, Husband bought a beer from a Russian, and I had a conversation about surfing with a mate from Down Under. 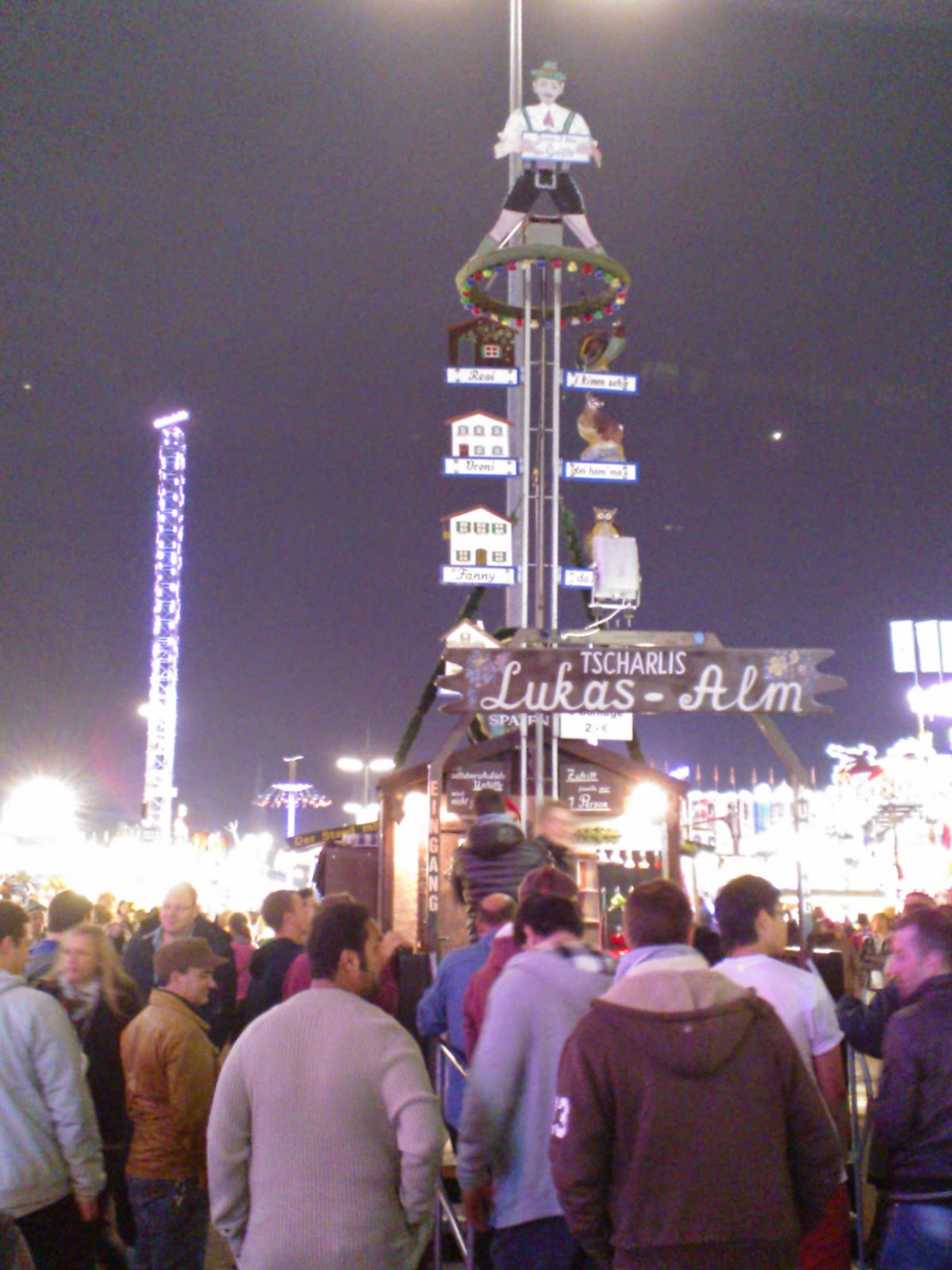 As the flights take off and the trains depart, Husband and I are suddenly sticking out again as "the Texans." (Have I mentioned the Indian restaurant near our house doesn't even ask for my name when I order take out?) 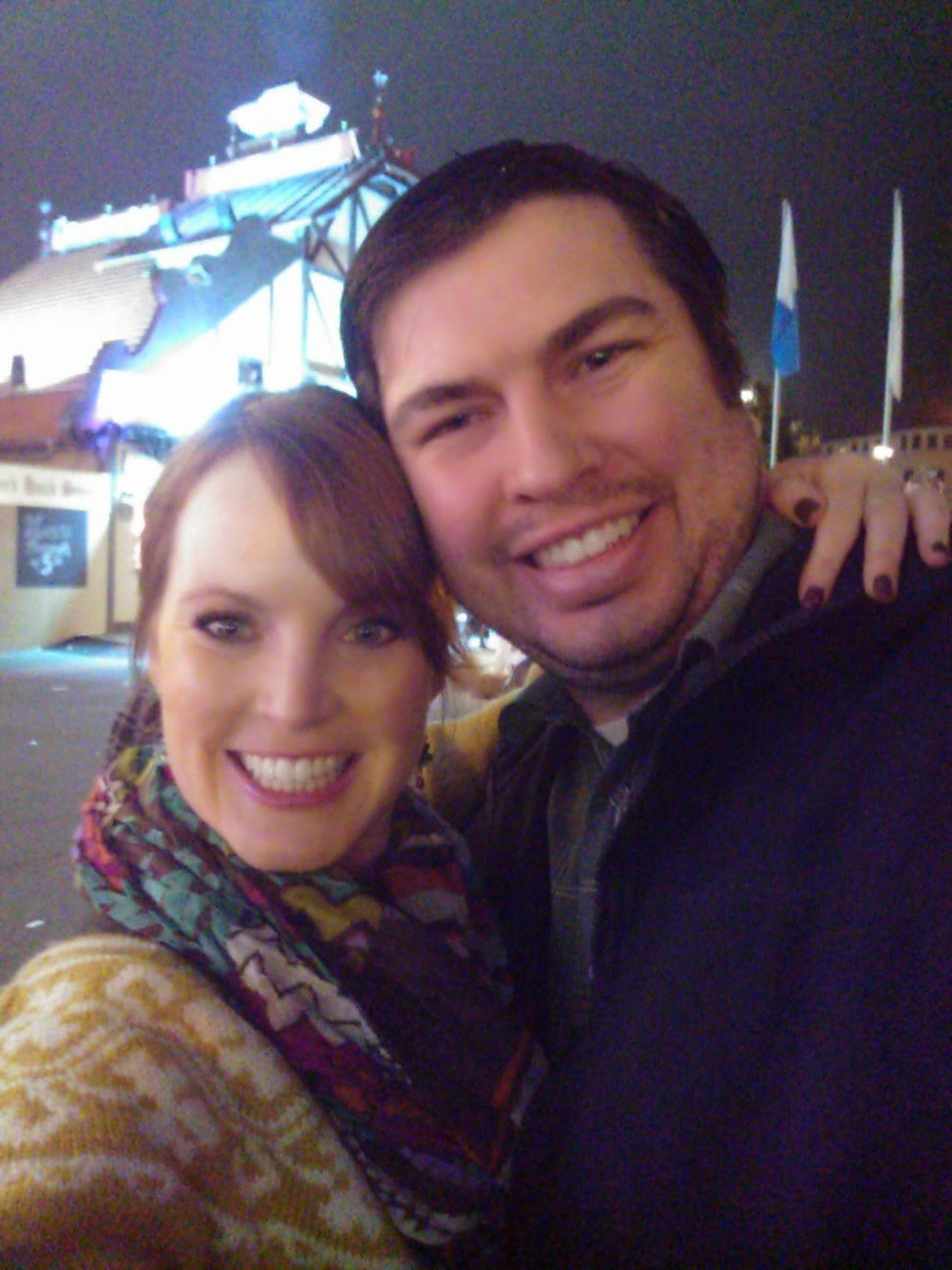 This was our third year to visit Oktoberfest and it did not disappoint. Check out this cool attraction! The ramp on the left is a conveyor belt people ride standing up, then you walk up the stairs to the top of the tower for a cool view of the festival, then you slide on a carpet scrap all the way down. Talk about some good old fashion fun! 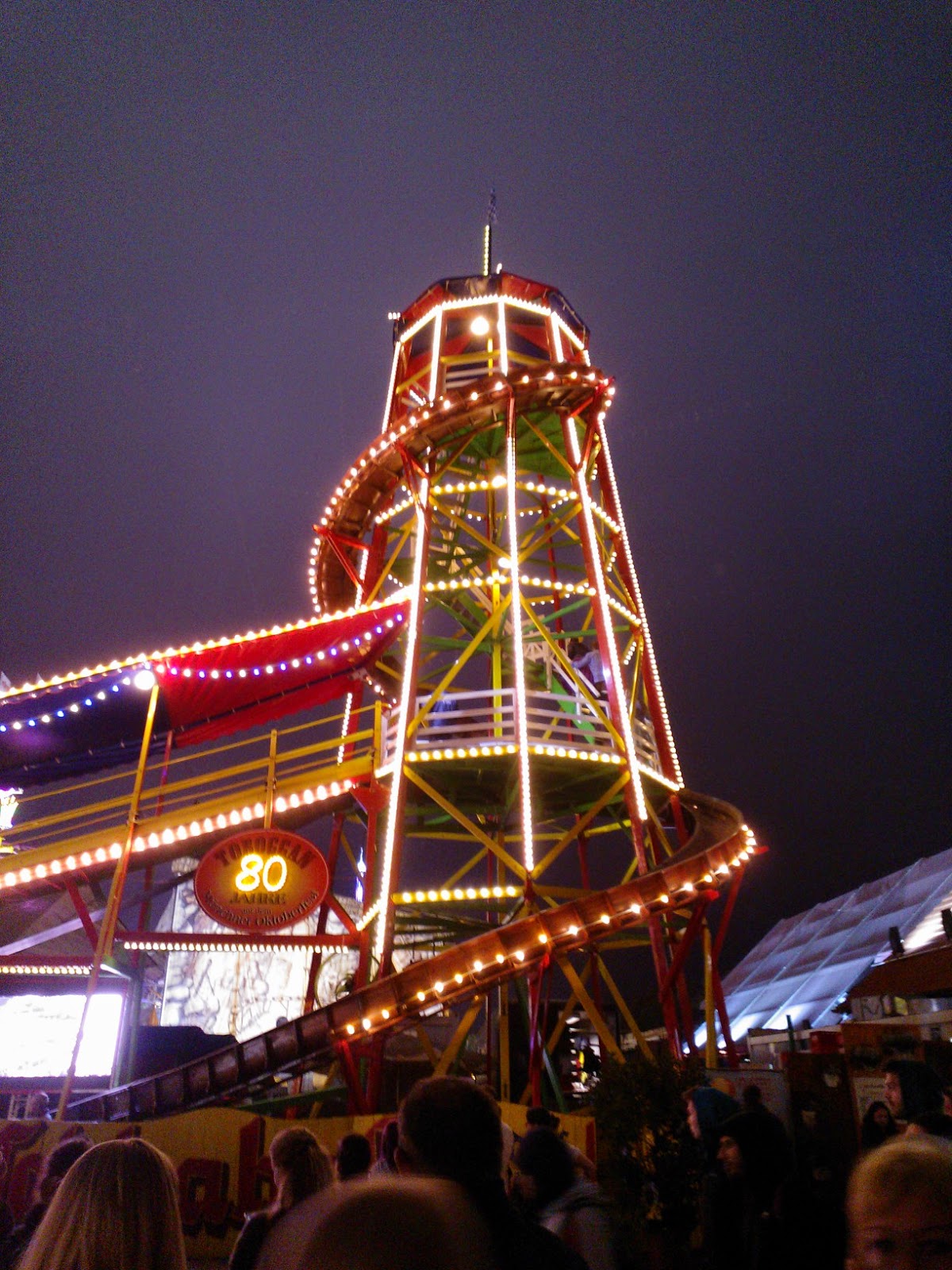 This year Husband's cousin came to visit during the last weekend of Oktoberfest. We arrived at the festival around 8:00 p.m. and were doubtful of getting into a beer tent, let alone a table inside a beer tent. 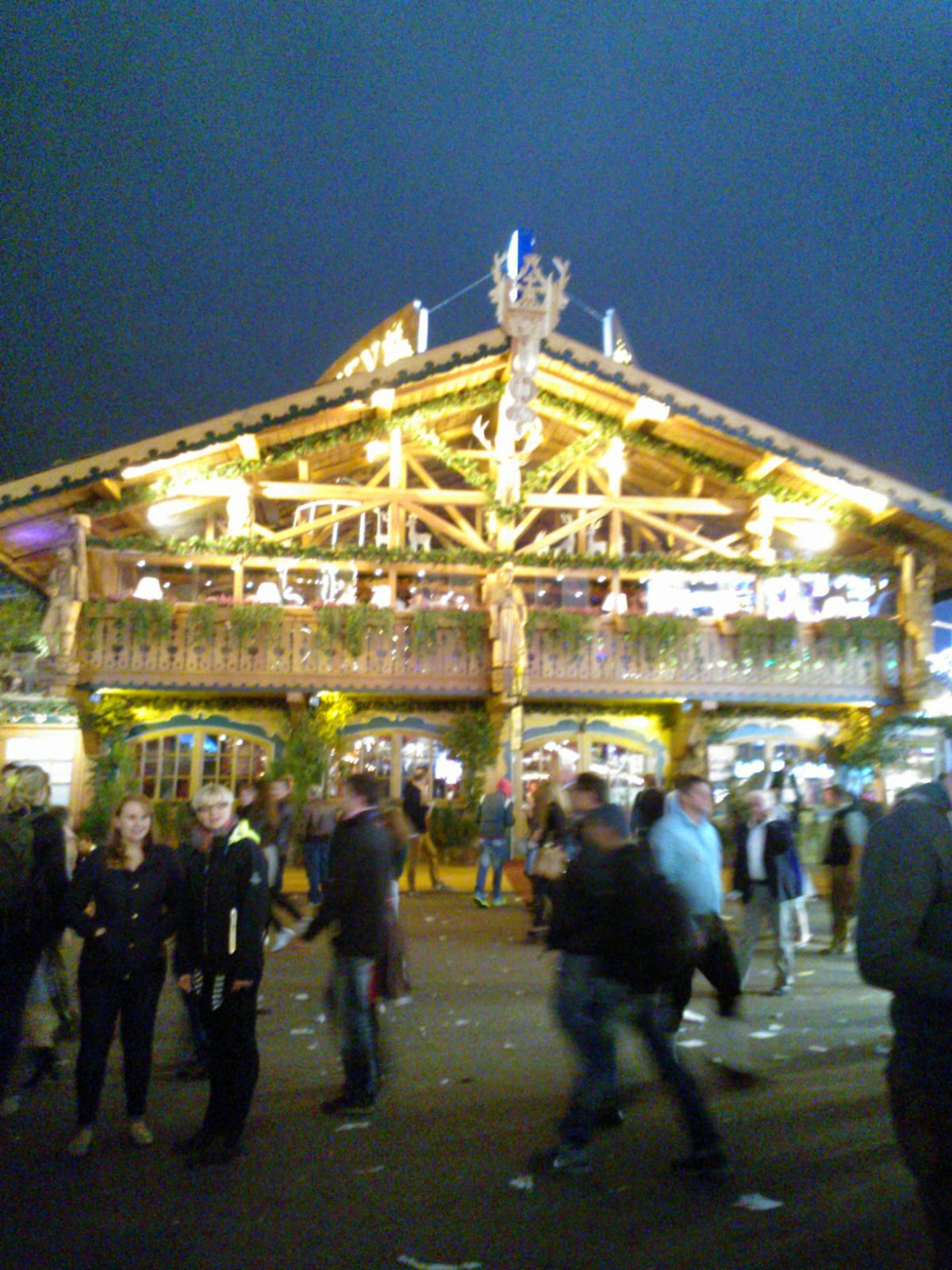 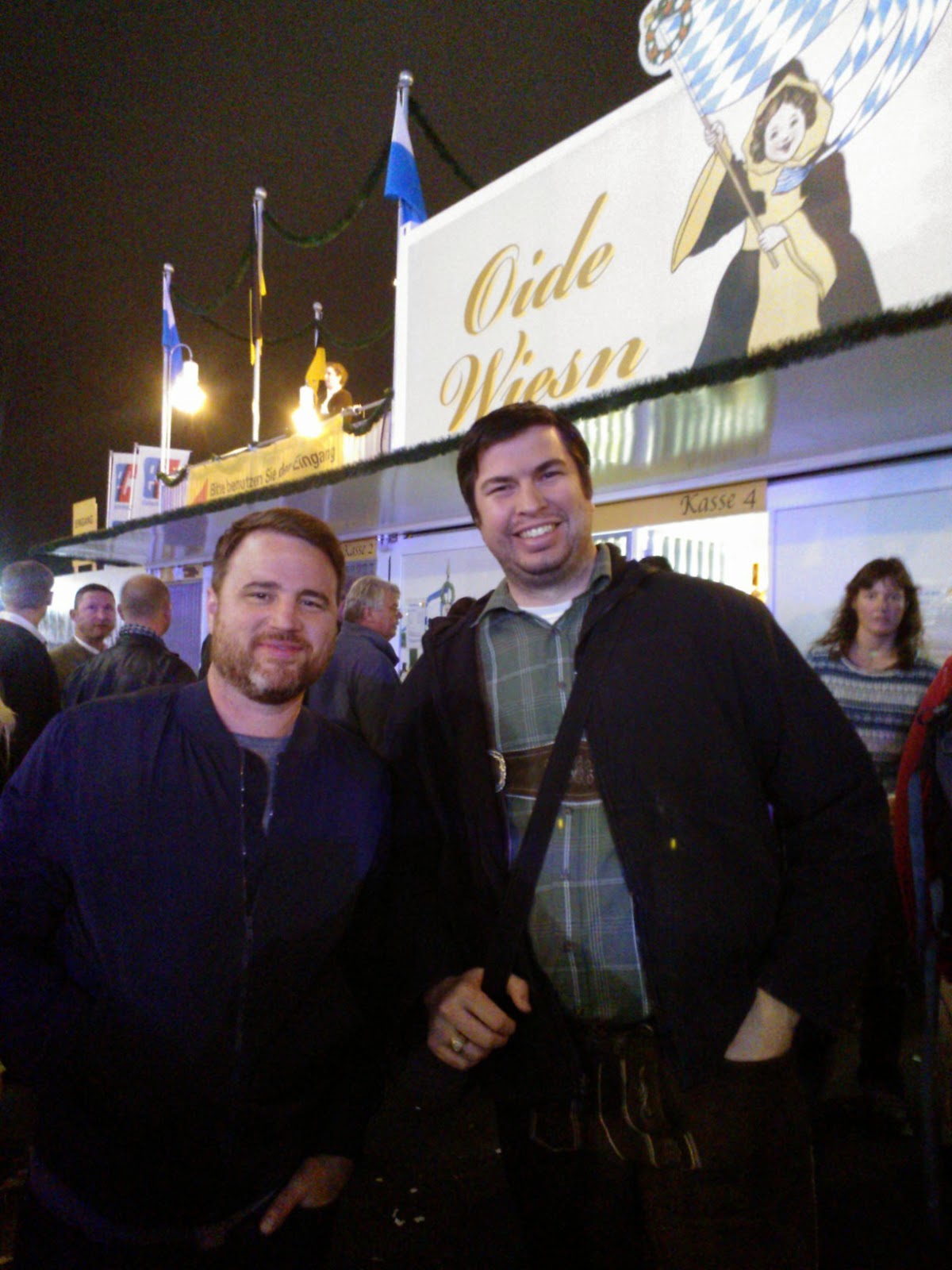 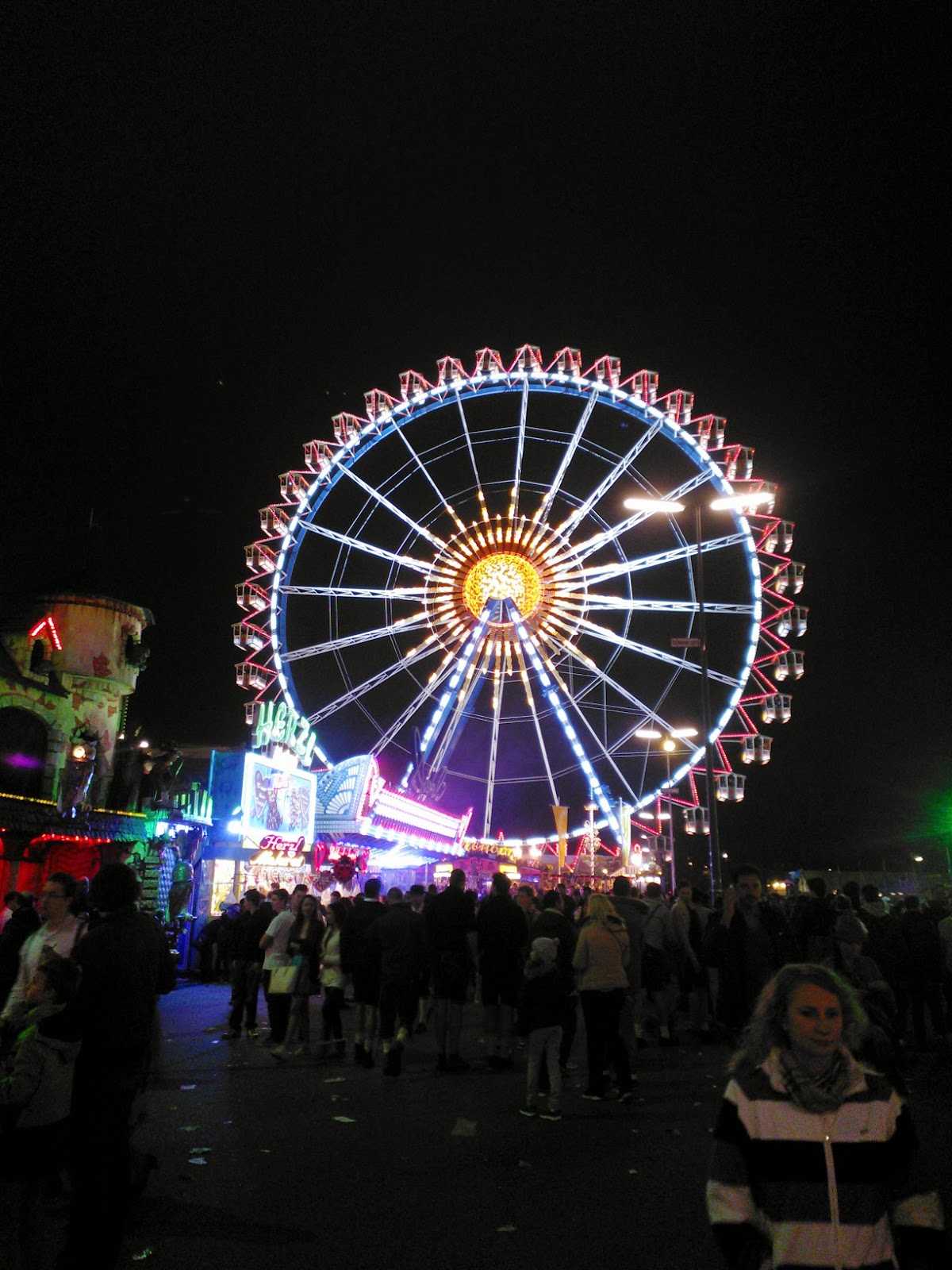 We decided our best bet would be to head to the section called "Oide Wiesn" which means "Old Wiesn". Not too many tourists know about this back part of Oktoberfest. It is vintage version of Oktoberfest with restored rides, traditional tents, and old beer/food recipes. 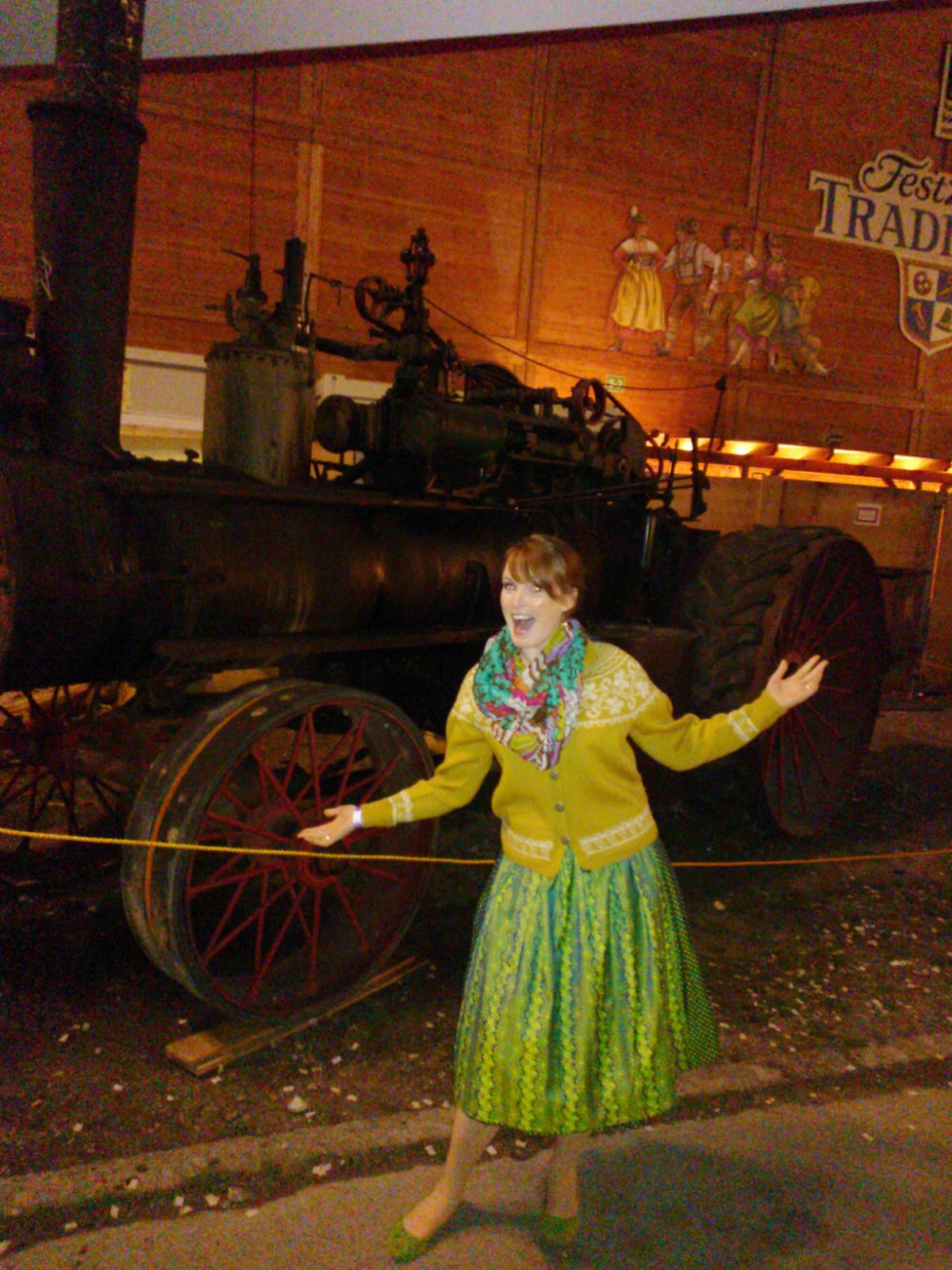 Tractor Pic for my Dad

When we walked into the Ode Weisn we noticed there were far less people. It began to look like our chances of getting into a tent were possible! 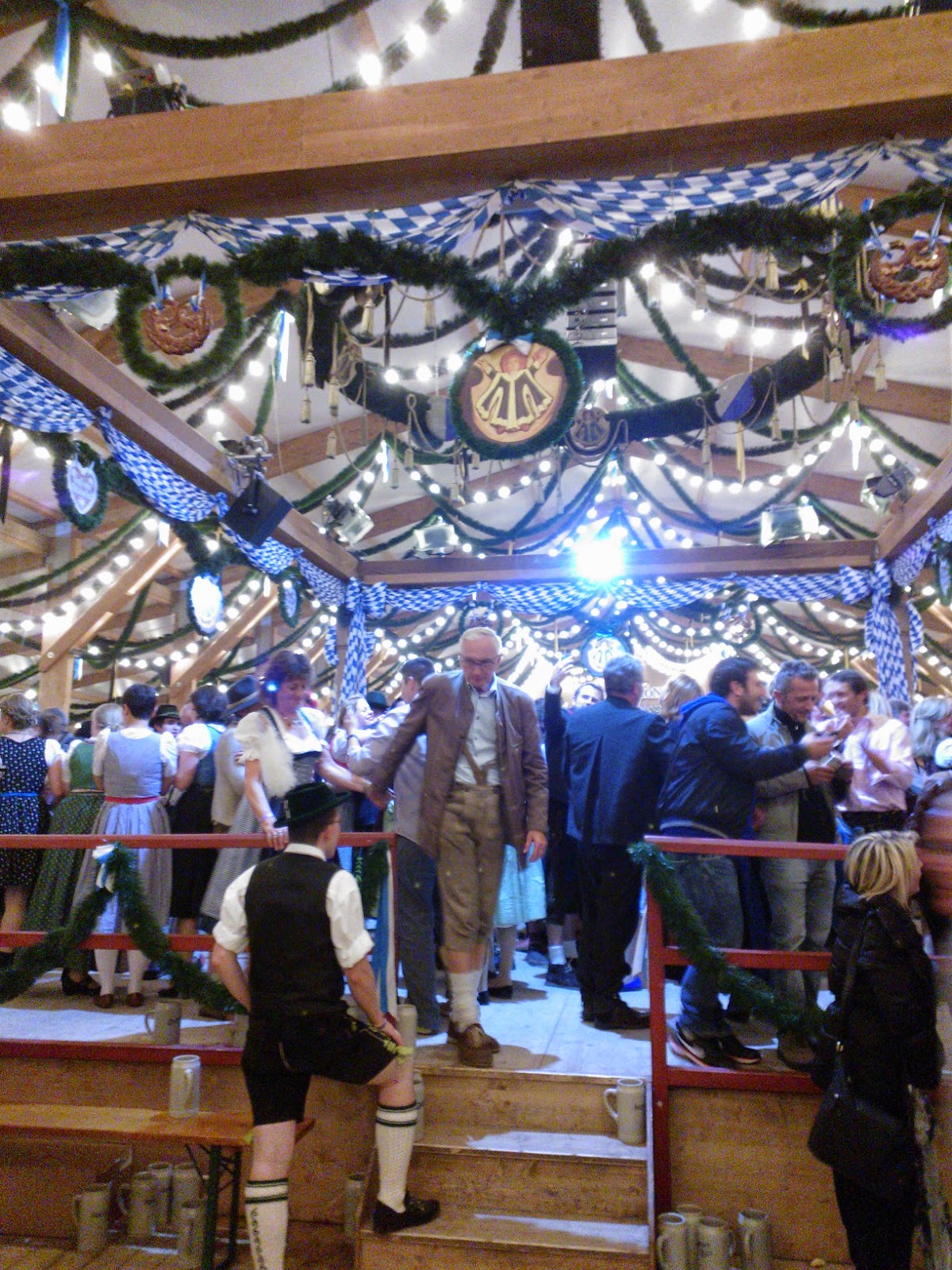 As luck would have it, we got into a tent! (On a Saturday night...without reservations!) We found a waitress and asked her if there were any spaces left in her section. She asked a table if we could join them and suddenly our new Bavarian friends were scooting down, making space. 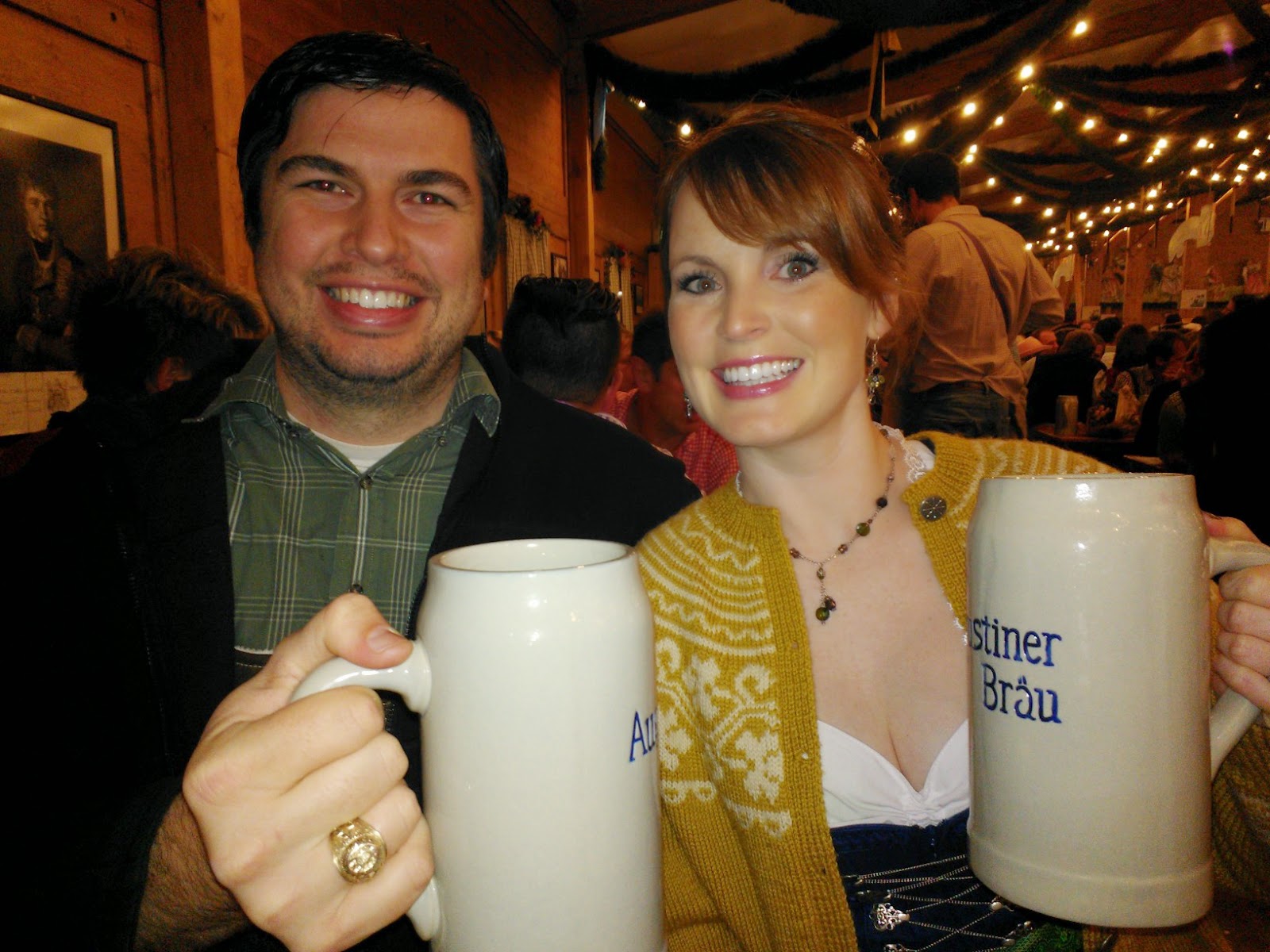 Now I'm not much of a beer drinker. I think the last time I drank a beer was Oktoberfest 2013 come to think of it... but Saturday night, I swore this was the best beer I had ever tasted. Something about the vintage, ceramic mug just kept that beer colder longer. Or perhaps it was the old recipe I enjoyed best? 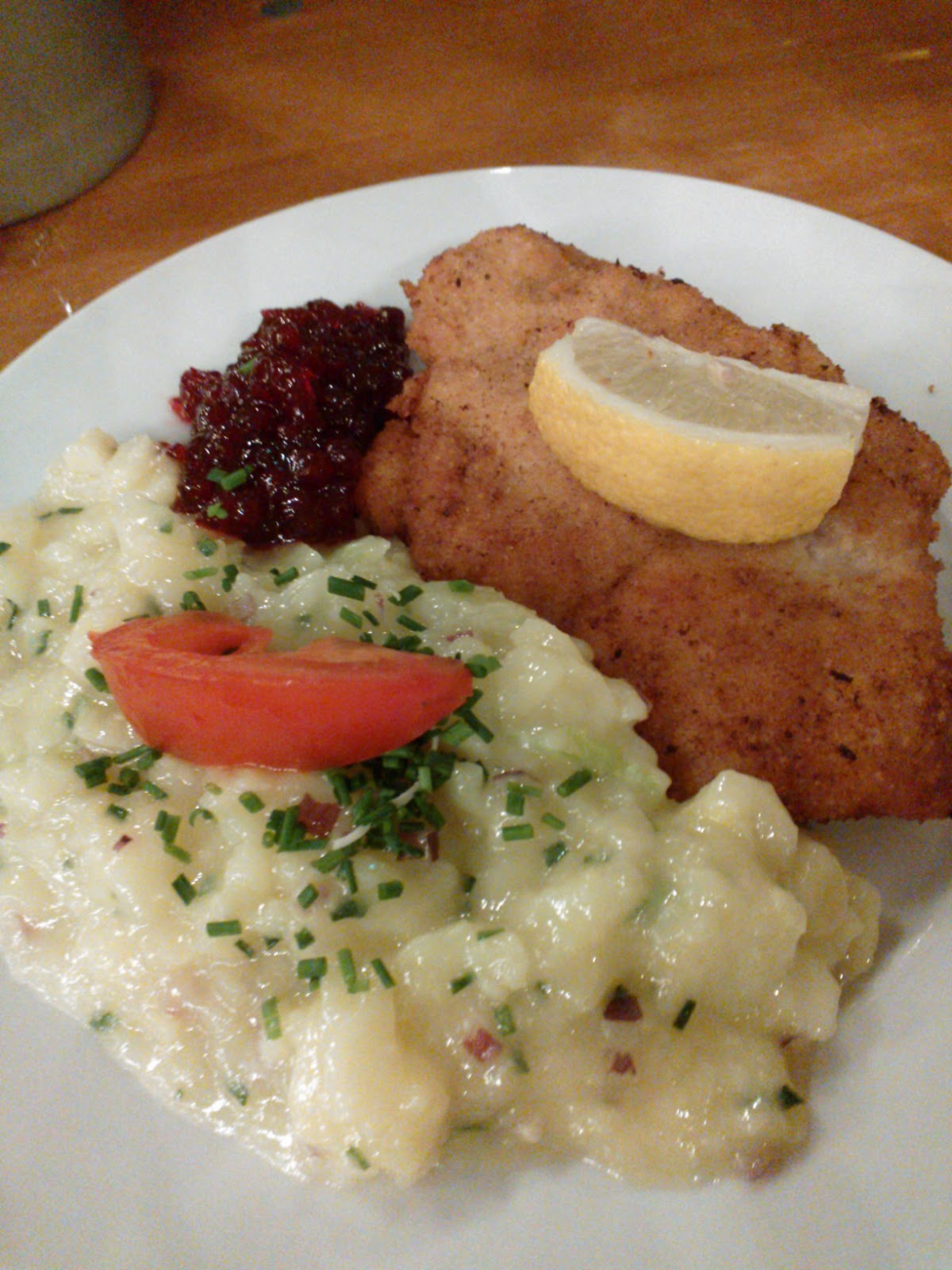 Dinner was a bit on the pricier side. This is not uncommon for Oktoberfest. Husband and I paid 51 Euros for two beers and two dinners. Usually, when we eat out we pay an average of about 40 Euros. I got my all-time favorite Bavarian schnitzel and potato salad. Delicious! Something extra sweet happened during this year's Oktoberfest. I have promised you pictures and now here they are...Husband and I dressed in traditional Bavarian lederhosen and dirndl! 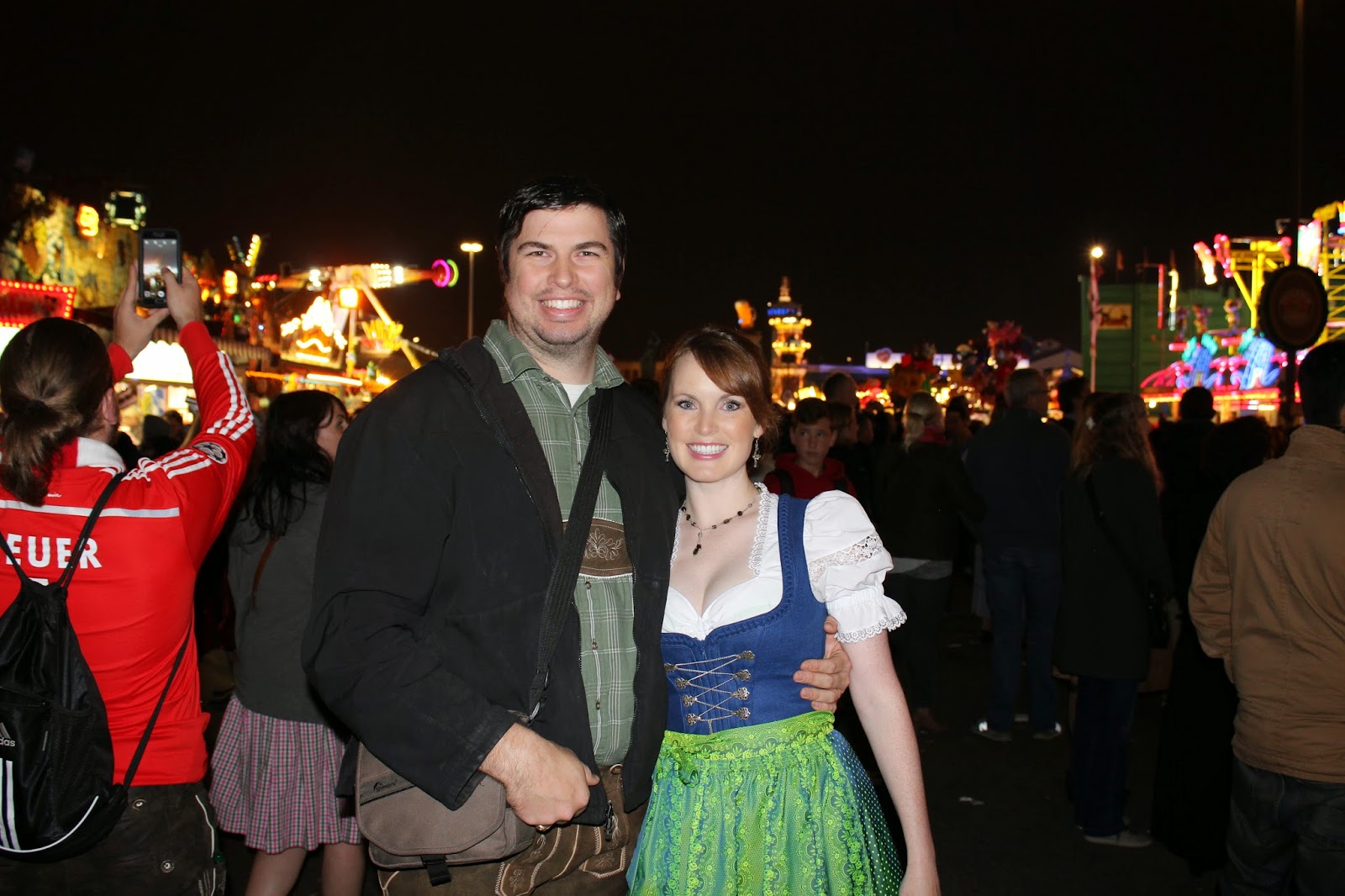 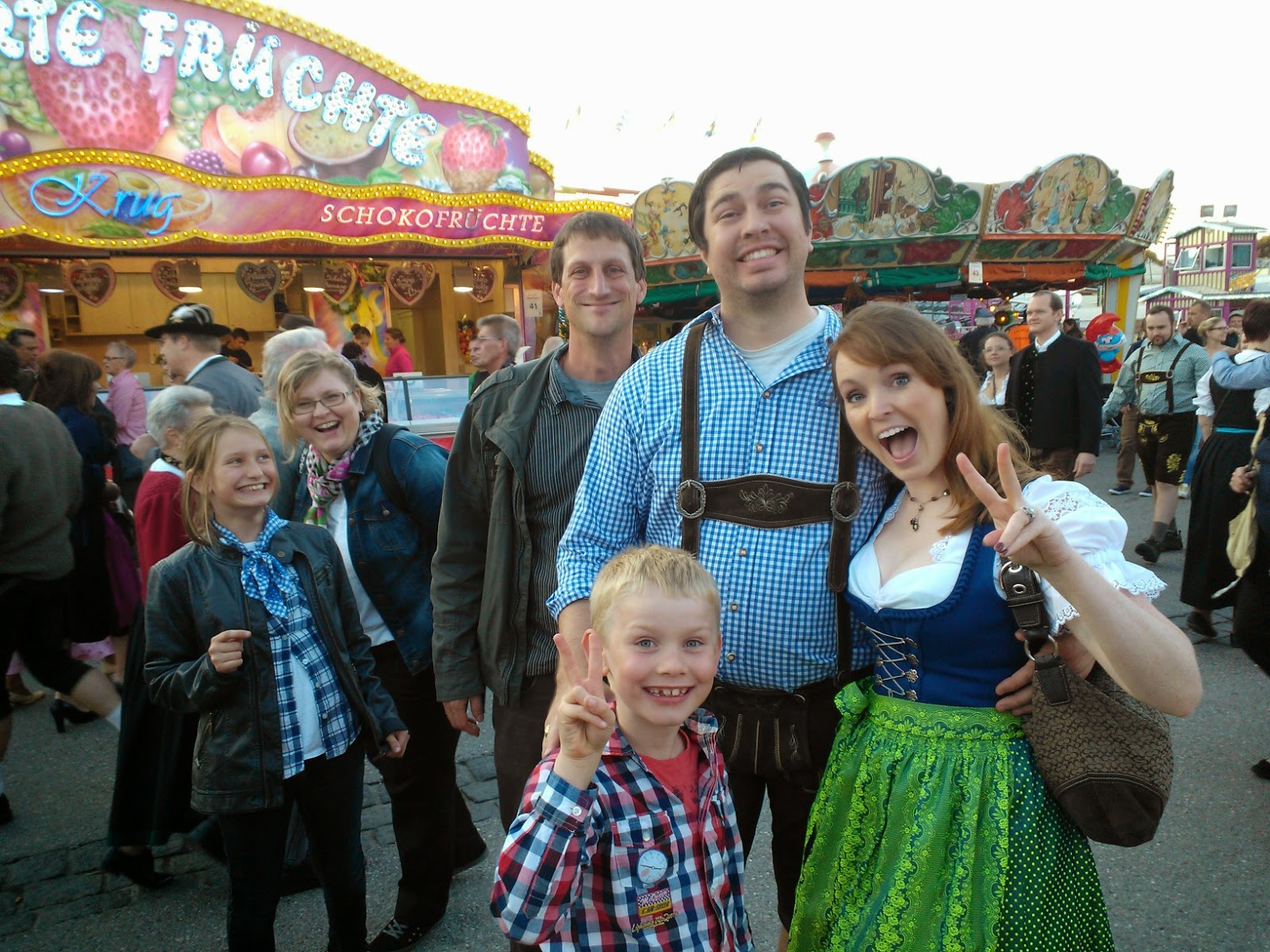 If you remember from back in June, Husband received his lederhosen from myself and his parents as a 30th birthday present. His pants are made out of leather and are meant to last a lifetime. 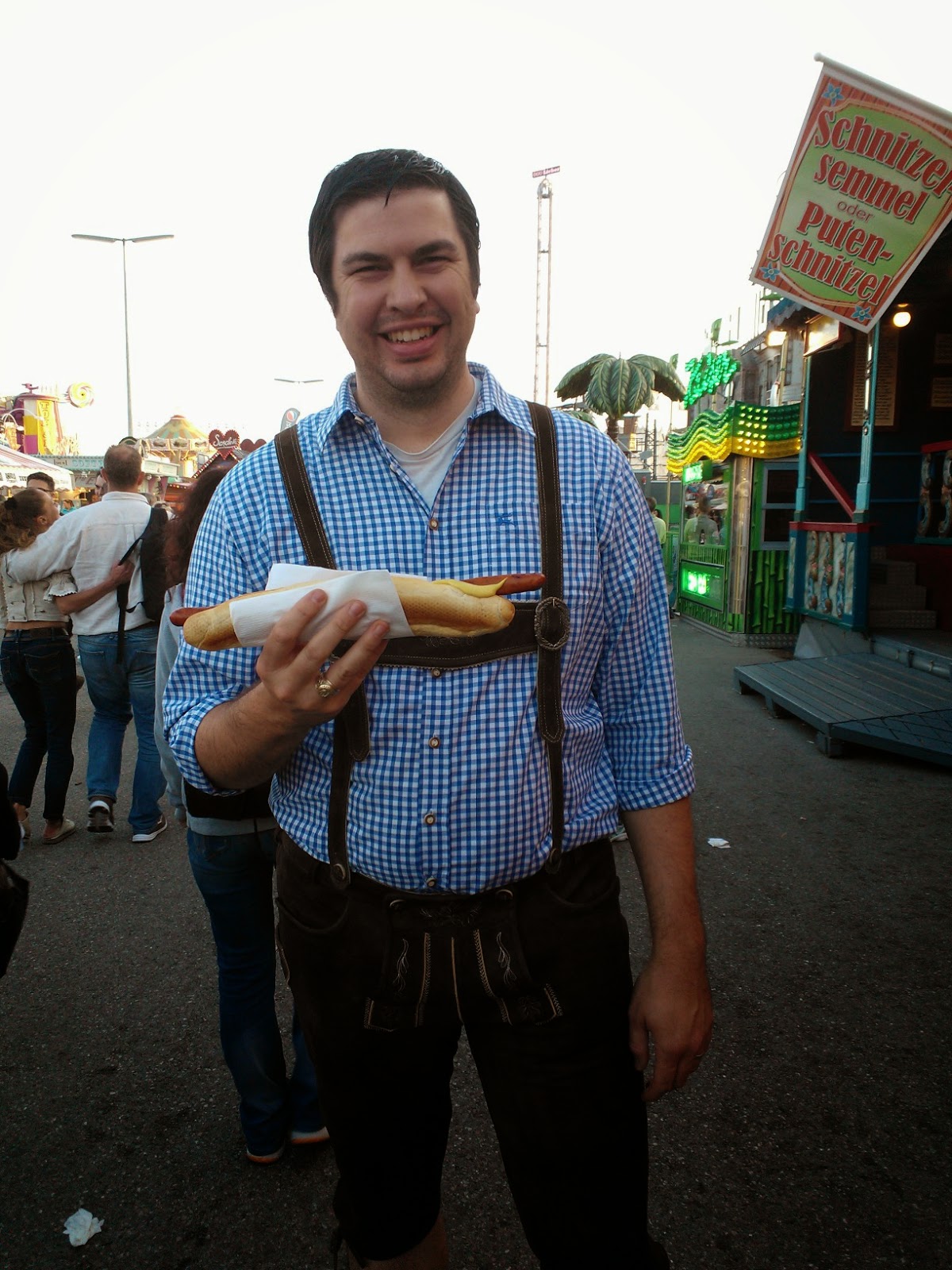 Thursday evening, Husband wore a traditional gingham blue button down shirt with his lederhosen. Most men wear blue, green, or red gingham and the buttons look like they are made from deer antlers. It was a bit shocking to see Husband dressed as a true Bavarian! 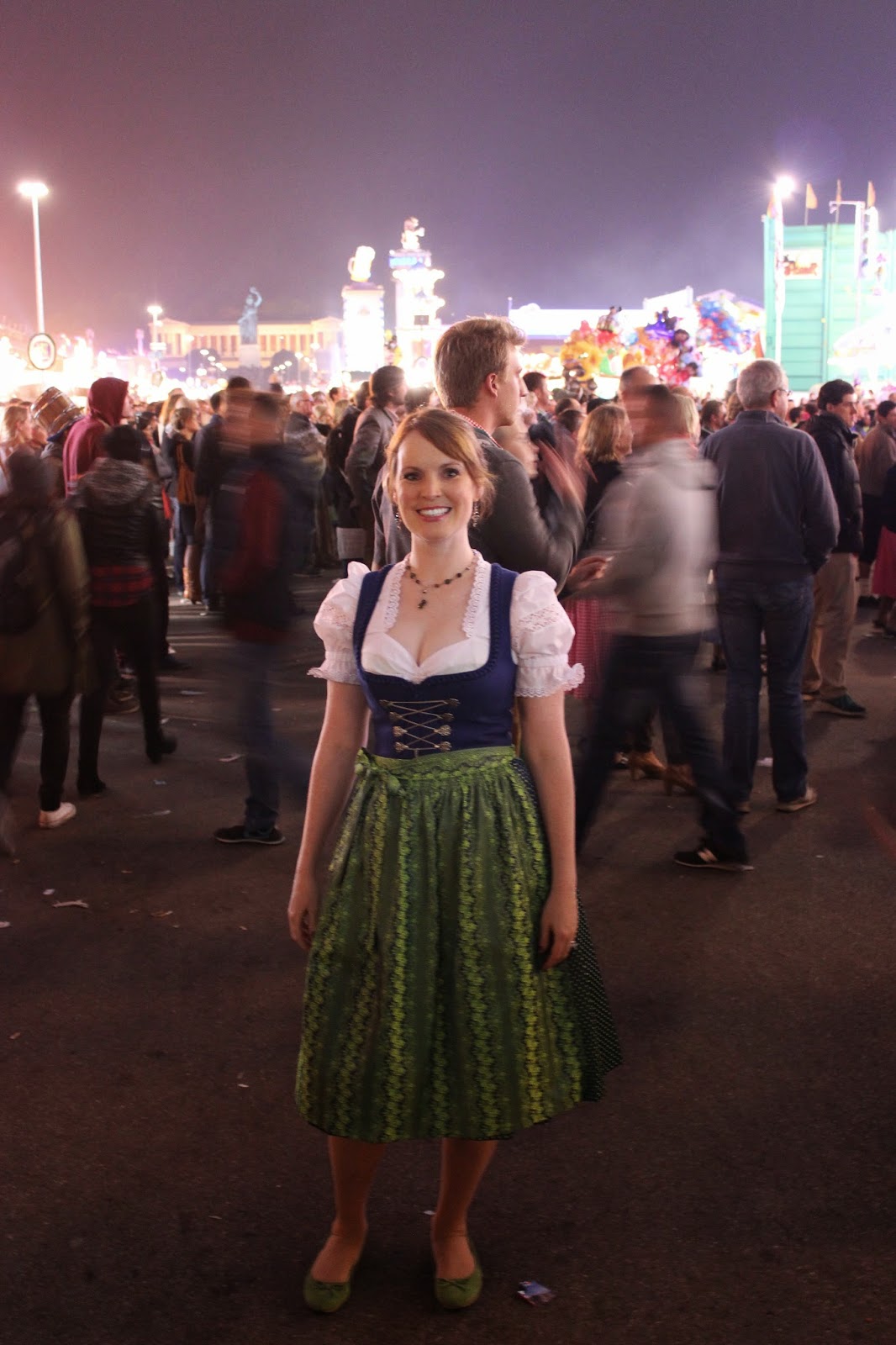 I had been on the search for two years for the perfect dress! I knew I wanted my two favorite colors, cobalt blue and green apple. One day I randomly stopped inside the trachten shop, Angermaier, and there it was... the dress I had envisioned for two years, on "clearance" and in my size! 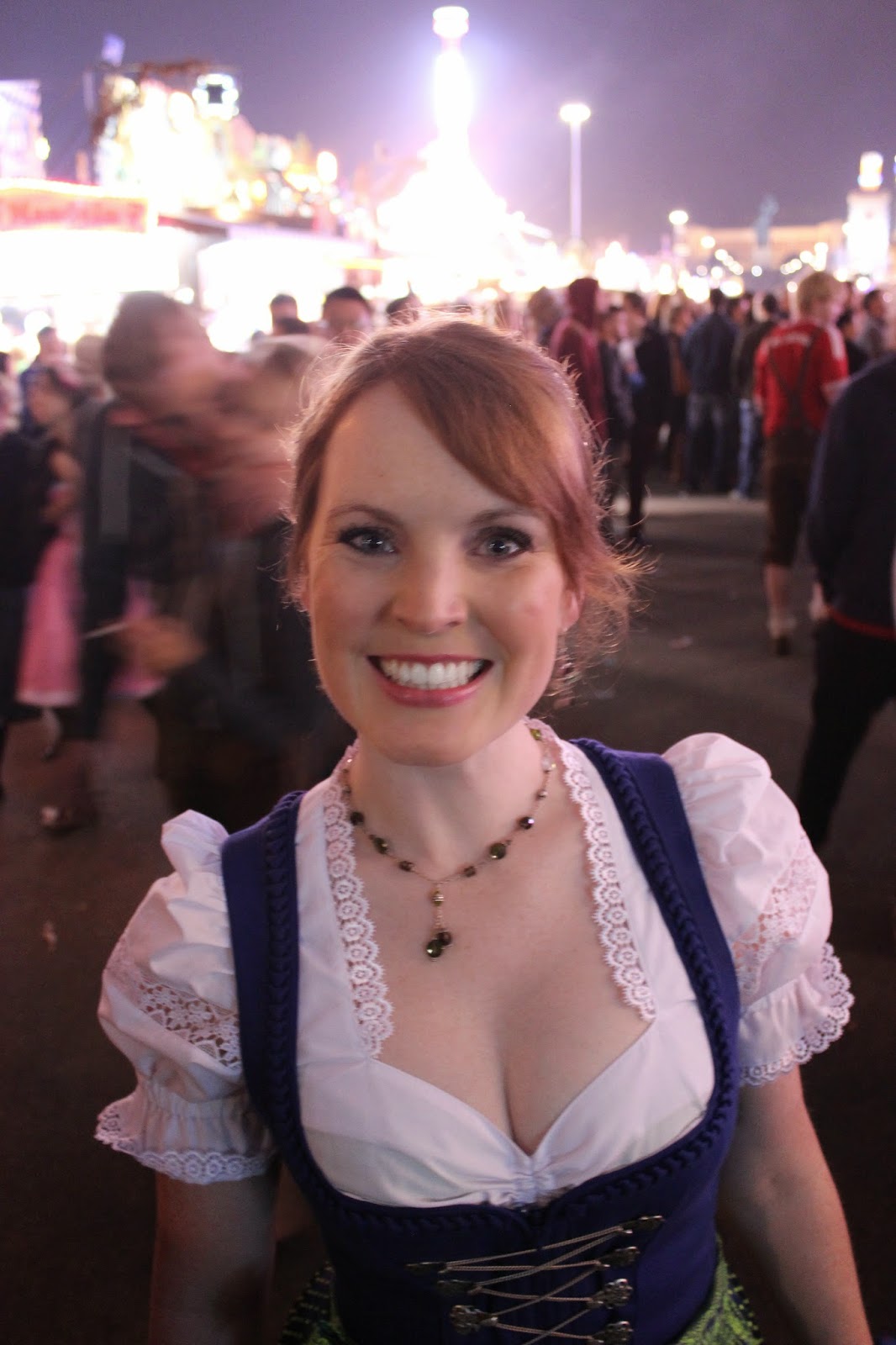 I quickly called Husband to verify the purchase was ok (it was over our "No questions asked" amount) and he said "No problem." As easy as that, it was the only dress I tried on, and it was what I like to call "shopping fate." 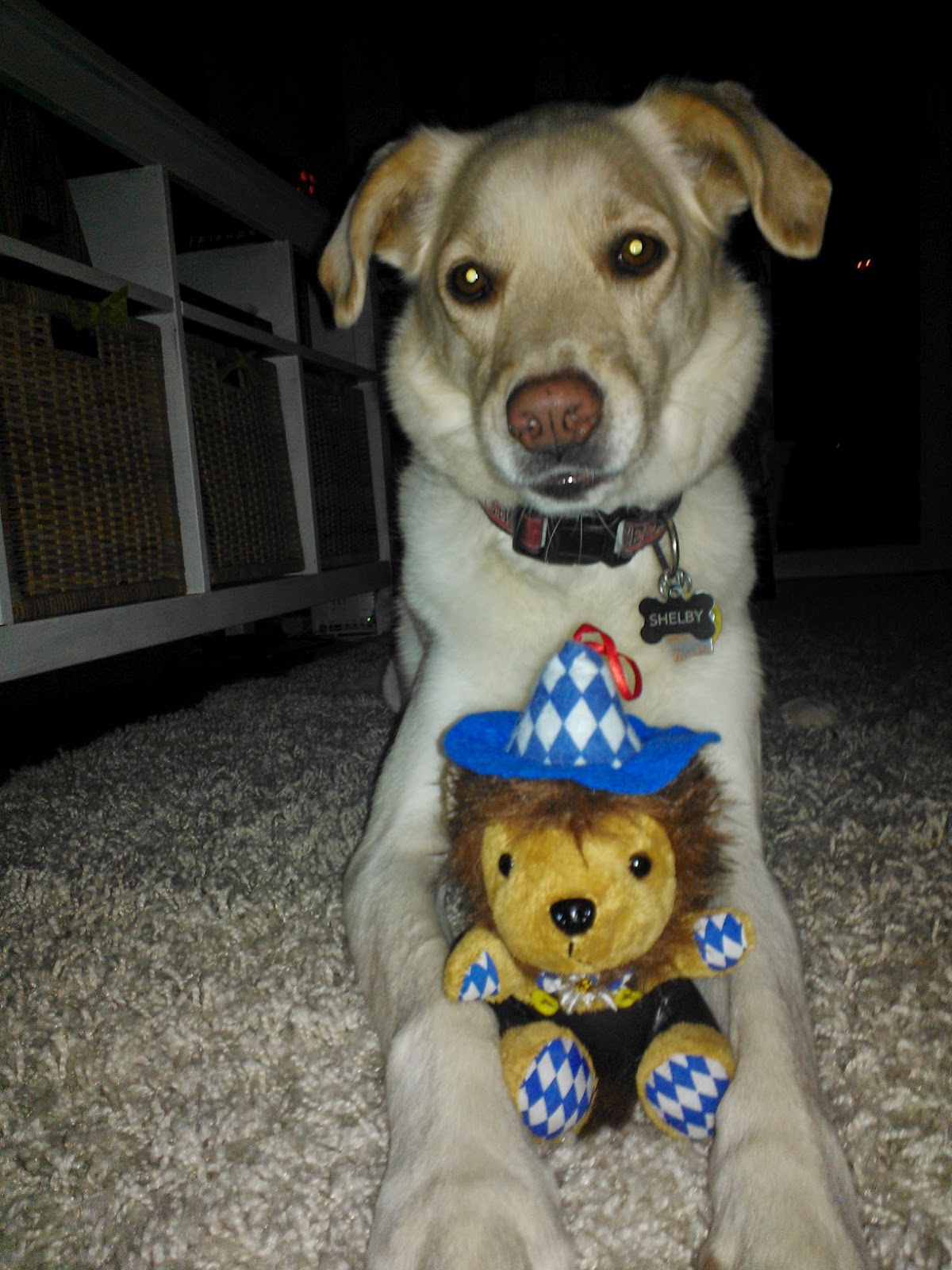 Even Shelby Dog joined in on the Oktoberfest fun! She is loving her new Bavarian lion "Lowen". (Husband won this in a shooting game!)

Did you celebrate Oktoberfest this year? Who is interested in visiting Oktoberfest in Munich? Is it on your bucket list?